While the Android Market has been around for a while, it wasn’t until 2011 that it really came into its own.  Unsurprisingly, this was also the year when gaming on the platform took on a more serious level.   While we seldom see publishers rushing to make Android exclusives just yet, many games that show up on iOS now make their way to the Marketplace with little time in between releases.  Suffice to say, gaming on Android is better than ever. Here are the ten titles we feel really stood out from the pack this year.

If you enjoy physics-based puzzle games on any platform, you’ve probably seen this indie classic in its previous PC incarnation.  Well, it debuted in Android late this year and quickly made a huge dent in the landscape.   For the unfamiliar, the seminal physics-puzzler has you building a series of structures using “goo balls,” leading the globules towards a suction pipe that’s usually positioned in a most awkward of locations.    The outstanding physics, the darkly comic aesthetic and the devious level design all conspire to create a most engaging game that’s received an even better control system than the mouse-and-keyboard combo it used to rely on.

Released by Disney Mobile, this physics-based puzzler is easily one of the most addicting games of the year.  In Where’s My Water, your task is to guide a pool of water through a puzzle, leading it to a shower where an alligator named Swampy waits to take his bath.  Doing that requires you to get creative with how to funnel water and occasionally dig through dirt, all while avoiding contaminants that can dirty up Swampy’s water.  The great mix of easy and difficult levels, clever grading system, and excellent water physics make this a solid title for gamers of all levels.

Everyone’s got their own favorite “Story” game, but to me, this classic sim-lite from Kairosoft best exemplifies the studio’s ability to combine cute graphics and accessible gameplay into downright addictive results.  Sure, the actual football games end up more weird than realistic (heck, you’ll have players bursting into flames and stuff), but you’d sooner forget that due to all the engaging entertainment it delivers.  A definite go-to time waster if you ever need one.

There were a ton of racing games on Android this year.  Despite the sizeable amount of releases, Asphalt 6 is the easy pick as the best of the bunch.   With 42 different vehicles, 11 leagues and 55 events, it packs a massive amount of content.  Top that off with plenty of games modes (including the unforgettable “Adrenaline Boost” mode and 6-person multiplayer races), high-end visuals, lots of custom tuning, on-point controls and good physics to turn in what’s easily the most complete racing game available to the Android crowd.

So many tower defense games, so little originality.  And we’re talking all platforms here.  While Sentinel 3 embraces the same tradition as other copycats do, it adds an innovative layer that changes the game in a novel and exciting way.  This comes in the form of a “Commander” mobile super unit, which gives the refined tower defense play a whole new injection of awesome.  Basically, you manage both your towers and the Commander, which you can have jumping gate to gate, using its abilities to turn the tide of attack in your favor.  The graphics are polished to perfection, as well, making it both a delight to play and look at.

While first released on iOS last year, the Android version of Carcassone is, surprisingly, not just a direct port of the much-lauded iOS title.  We’re not sure about the exact reasons for tweaking the game another way, but we’re glad they did, as the game does feel somewhat fresh and different, especially for those who’ve played the iOS version before.  Easily the best boardgame adaptation for mobile, it’s both fast-paced and strategic, all while giving just enough window for luck to still leave it unpredictable.  Almost every match plays out differently as a result of how the board is formed during  each game.  Simply put, if you want a multiplayer board game on your Android phone, forget all those boring dice games from your youth — this is the way to go.

The Android Market isn’t quite teeming with turn-based strategy games just yet.  So when a good one shows up, you can bet people will be talking about it.  This year, this is that game we heard a lot of buzz about.  Gameplay, which is done across a hexagonal-tiled battlefield, is simple and accessible.  The visual style is cartoony but appealing.  Don’t let that simplicity fool you, though: this is a tactical game — one that requires you to factor in different unit types, the layout of the terrain, and numerous other variables into your every move.  Plus, the humorous voice work is topnotch, making for one of the funniest games of the year .

The prequel story to console title Dead Space 2, this game arrived on the Market late in the year and has, so far, lived up to all expectations.   The highly-polished graphics, creepy audio and general storyline is filled with horror and gore, perfectly setting the scene for the kind of third-person shooter that will spook you as much as fuel your bloodlust.   Controls are really optimized for tactile interfaces, too, so it feels really smooth to play.  Just cross your fingers and hope your phone can run it, though.  Oh yeah, it’s a huge download, so be prepared to stand by. 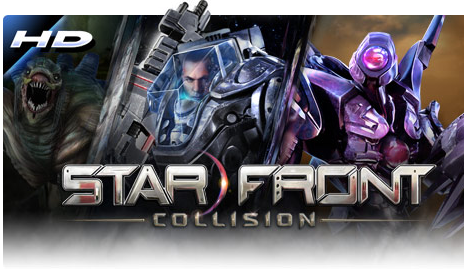 There’s little that’s original about Starfront: Collision HD.  Despite that fact, it plays so good that you don’t really care.  This is about as close to Starcraft as you can get on an Android device, so if you’re into that sci-fi real-time strategy bit, we can’t imagine you passing up on this title.  It features three unique races to play, a meaty campaign mode, excellent touch controls (with shortcuts to boot) and a decent multiplayer mode to wreak havoc in.  Originality is overrated anyway.

I know, another physics-puzzler.  You have to admit, though, it’s the most fitting genre for mobile platforms and Cut the Rope happens to be another of the standouts.  From the same publisher that brought the world that unstoppable phenomenon called Angry Birds, this game brings simple swipe controls (for cutting the rope), an insanely adorable candy-craving protagonist in Om Nom and inventive mechanics.  Clearing levels require precise timing and quick reflexes, making for one fun and challenging game.