Remember summer last year when you couldn’t scroll through your feed for over five minutes without running into a photo of someone riding a unicorn or a swan float? Yeah, it was fun. And just mildly annoying.

The good news? It’s almost summer again. The bad news? Your social media feeds will be filled with pool floats again. Instead of gnashing your teeth at the sight of people striking their best pose while riding one, why not just join the fun? Here are some awesome floats that would look picture perfect on your Instagram. 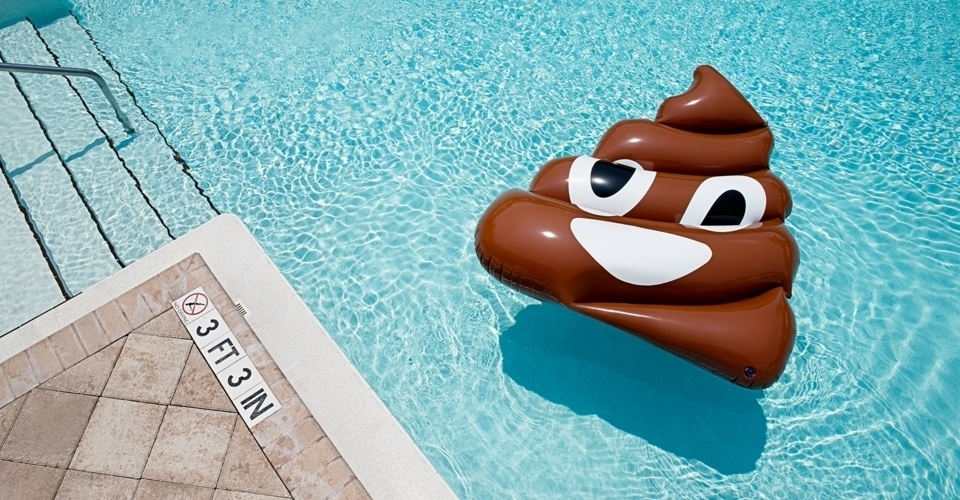 Likely set to be the pool float of the summer, this inflatable version of the nastiest emoji in existence will be the hands-down attention grabber at any pool party. At over six foot tall, it’s one big floating turd, too. Seriously, man, if you walk in carrying this in hand, everyone will be screaming, “Holy crap, you’re the man” while giving you a high-five and handing you a drink. And, yes, they’re handing you that drink so they can pry the poo emoji float out of your hands and take it for themselves. 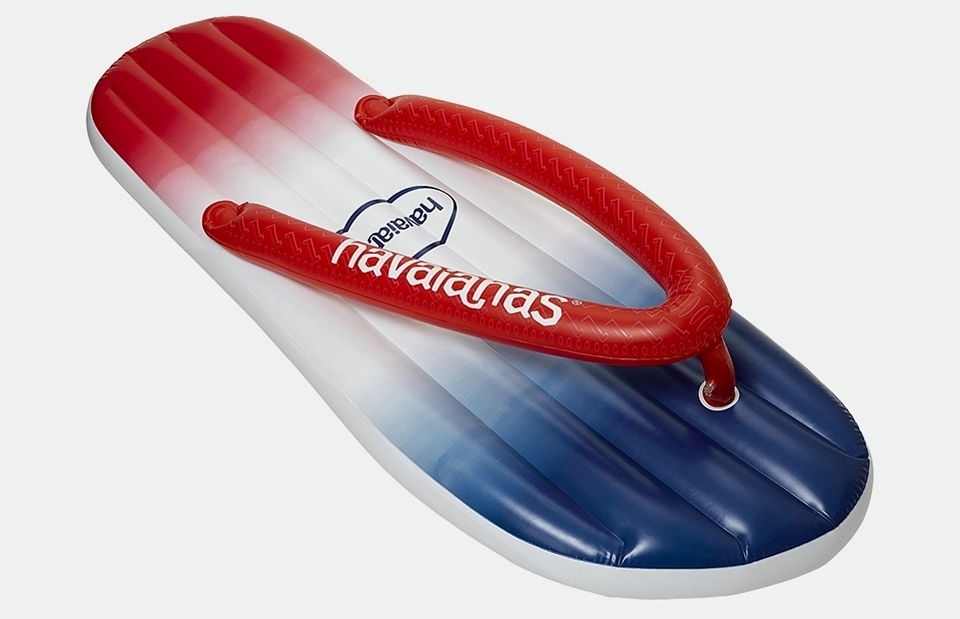 Yes, it’s a pool float that looks like a Havaianas flip-flop. And, no, it doesn’t stink like that Havaianas flip flop you wore to death while sweating like an ice cube in the summer at the beach party last year. At least, we hope not. Plus, you can have it stepping on the Poo Emoji Float in a realistic recreation of many beach scenes where dogs and humans all chill together in the sand. It measures 65 x 25.5 x 6 inches (length x height x width). 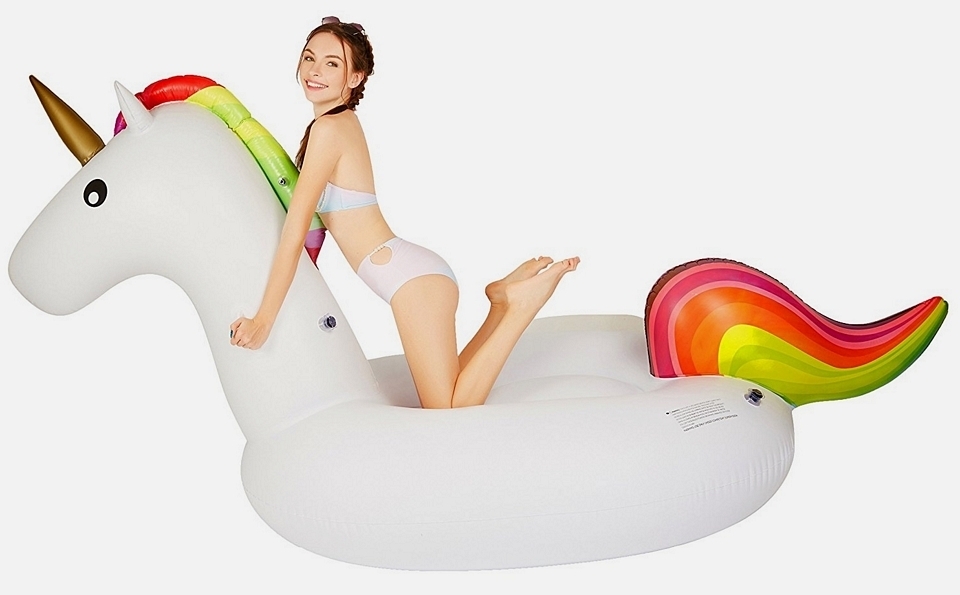 The hands-down star of impossible-to-count Instagram posts, this mythical horned creature continues to spread magic and whimsy wherever it goes, whether you catch it in a hotel pool, in a private resort, or your rich neighbor’s Olympic-size inground. This one’s the giant variety, measuring 108.2 inches long when fully inflated, ensuring two adults can ride it to the end of the rainbow in absolute comfort. 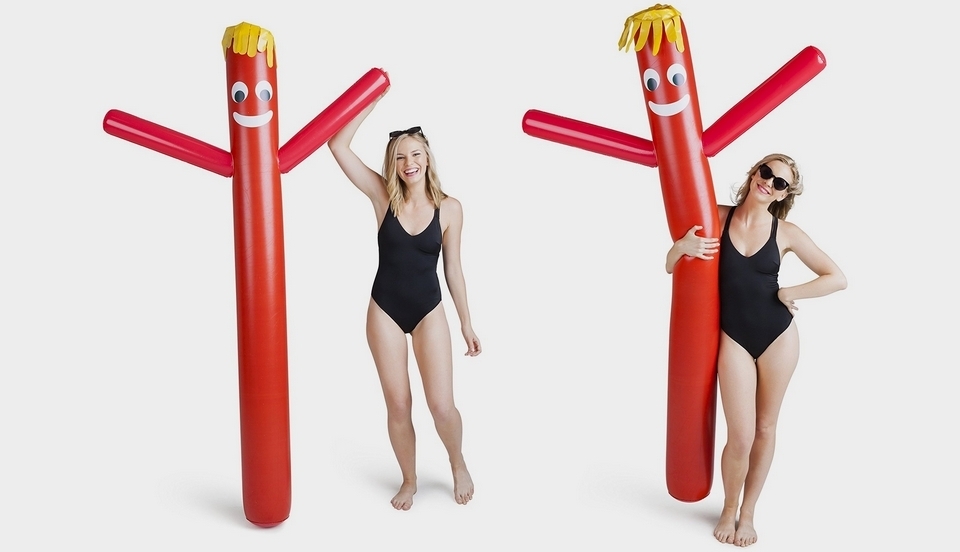 You know those inflatable Air Dancers that flail their arms and swish their bodies in goofy fashion? Yes, the ones businesses use to attract attention during events and promotions. Well, someone turned them into six-foot tall pool floats that you can use to attract people to your pool party. Or something like that. Granted, these ones won’t wave unless you actually move their limbs yourself, but they should make for an interesting addition to any summer shenanigan all the same. 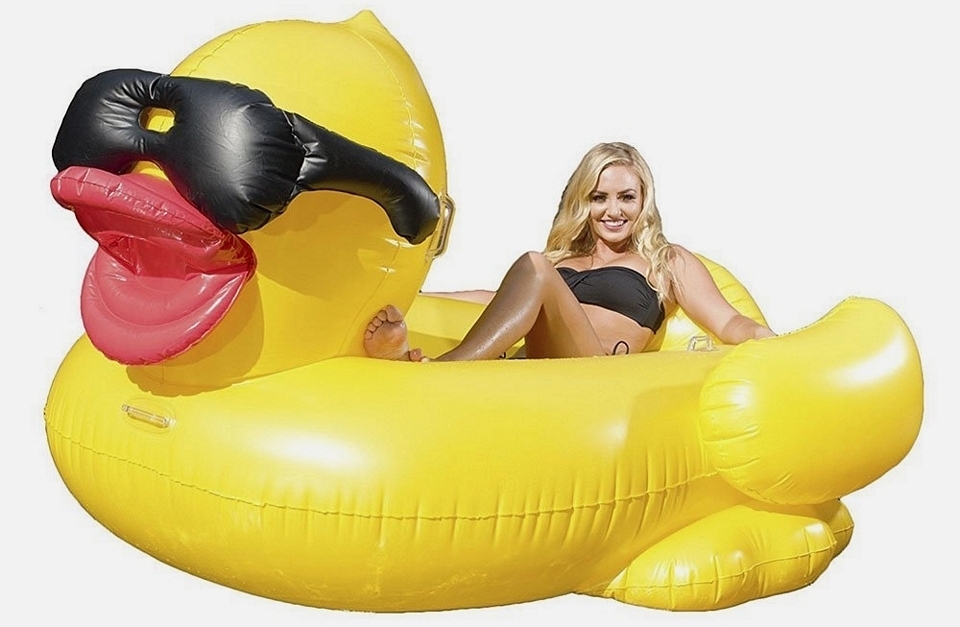 Derby duck races have helped countless non-profits and charity organizations raise funds for their causes. And the star of the show has always been those shades-wearing rubber duckies that just look too cool for school. This supersized version of the world-renowned duck sees it blown up to 81 x 76 x 44 inches, complete with four handles, dual cup holders, and quick-fill valves that let you blow it up five times faster than other inflatables its size. And, yes, the darn thing still looks too cool in its supersized stage. 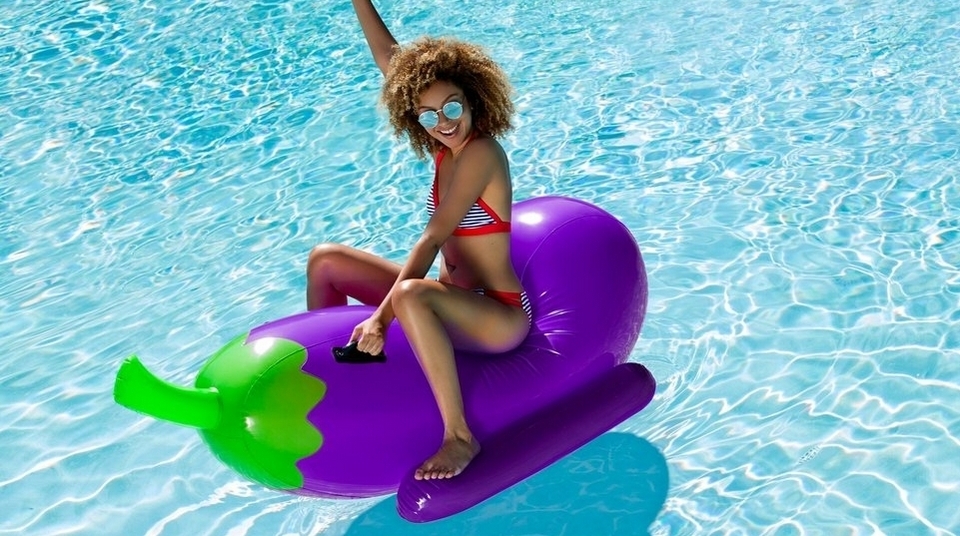 Another emoji-turned-pool-float, this inflatable version of the all-familiar eggplant is designed to be ridden like a bull. Well, if bulls had purple skin and a tail for a head, that is. At over six foot long, there should be enough room there to accommodate more than one rider, with footpads at the base to help folks keep their balance while it bounces around in the water.

Turn your Instagram feed into a mermaid party with this colorful float, which lets you chill in the pool while pretending to be Ariel in The Little Mermaid. Yes, the Disney animation, not the new live-action one that everybody hates, of course. Make sure to remind people of that when you post a picture on social media: “I’m Ariel, not the one that everybody hates.”

Sometimes, you just want your pool to look sweeter. And there’s no better way to do that than littering it with giant donut floats with a small piece bitten off for no reason whatsoever. Because, you know, what good is a donut if no one wants to eat it? Somebody wanted to eat this one, but since it’s four foot in diameter, they died of sugar overdose the moment they finished chewing through that single bite. RIP. Oh yeah, it comes in two candy-coated flavors.

We’re not quite sure how well Mr. Whale will fare in terms of Instagram popularity, but at 138-foot long with three sets of hand holds along its body, this can make for some serious fun in the water. Plus, it’s probably huge enough to actually make a dump as big as that 6-foot Poo Emoji, so you can have proper story continuity ongoing in your backyard pool parties.

Can’t stomach parading on social media riding a swan pool float when the rest of your feed is sci-fi and Star Wars? Yeah, we got you. How about spending the summer chilling with this Star Wars Millenium Falcon XL float from Swimways? At 61 x 46 x 13 inches, this thing should be big enough to ride even for grown fanboys, but the real star of the show are those awesome graphics that really bring out the likeness of Han Solo and Chewbacca’s beloved hunk of junk. 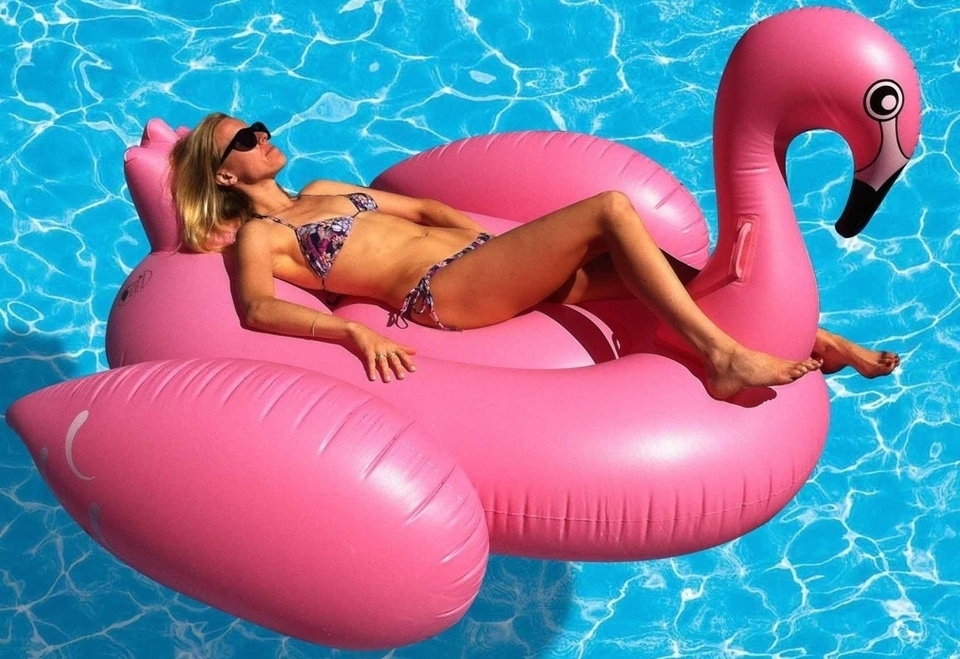 Quite possibly the original pool float star of Instagram, this 80-inch long blow-up flamingo will let you look all glammed up and posh while chilling in the middle of the pool. Granted, the swans, flamingos, and unicorns are, pretty much, all played out on everyone’s feeds if your sole intention is to show off for your social media fans, but a couple of these on an actual pool can really step the fun factor up a notch. 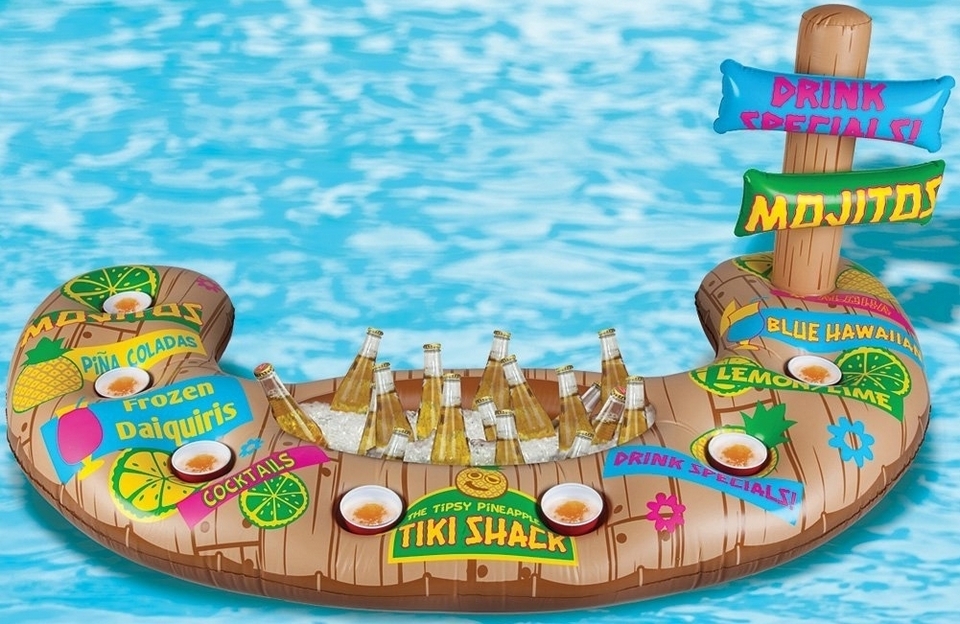 Cute giant pool floats are cool and all, but how lit is a party when no one’s getting wasted? This floating tiki bar lets you enjoy a dedicated spot on the water for setting down beer cups, tequila shots, and whatever else you’re imbibing at the party, so you can stay in the water and get buzzed all at the same time. With seven individual cup holders and a central section for holding ice, this should make for a handy addition any popping celebration.