120-Zipper Dress Is Modular And Dangerous 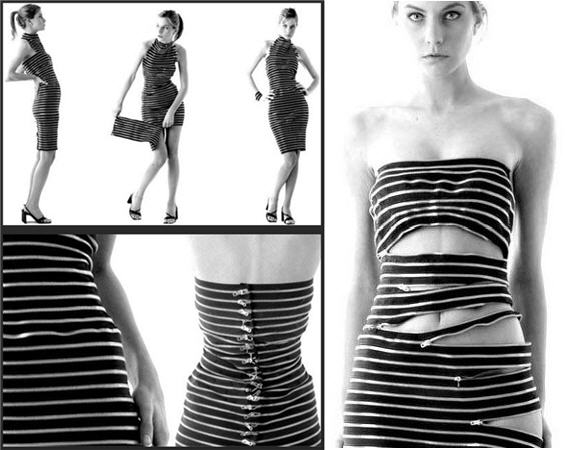 As the film There’s Something About Mary demonstrated so graphically, one zipper can do a great deal of damage.  Add 119 more of them little metal fasteners and you’ve got yourself the potential for a whole lot of danger.  Of course, the same thing also allows a dress to be more modular and that’s exactly what the 120-Zipper Dress from Sebastian Errazuriz purports to be.

Each stripe on the dress corresponds to one zipper panel that connects that particular fabric to the rest of the clothing.  As such, you can fashion the dress in large number of ways by simply zipping and unzipping each stripe.  You can also open the fastening implement halfway to show a little skin, all while keeping the full dress on.

Know how some dresses are laid out as a one-piece, two-piece, three-piece and such?  Because of the convertible design, Sebastian’s one-off creation should theoretically allow a 120-piece outfit – granted, it won’t look very good and will probably be NSFW in parts (yes, those particular parts).

At any rate, the dress is a fascinating design, although that back area is decidedly ugly with all the zipper handles hanging out.   The long strips of metal also make the shape badly deformed as it contours around more shapely areas of the body.

I’m not sure if girls will actually like wearing something like the 120-Zipper Dress.  You’ll likely have to put a gun to a man’s head to make him wear something like it, though, that one’s for certain.  Other than the obvious crotch-related disasters, men have too many protruding body hairs that a shirt or pants fashioned this way will undoubtedly catch on to – and that can hurt just as bad.