15-Baluster Desk Turns Your Mansion’s Balcony Into A Table 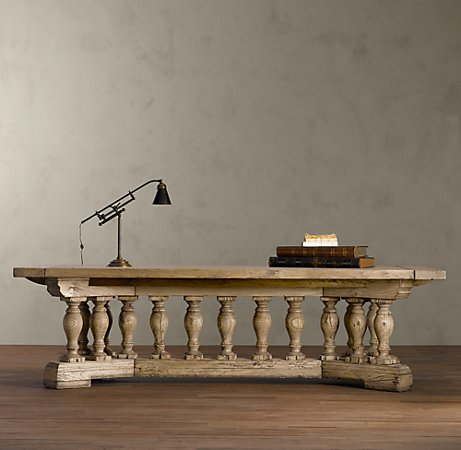 When you saw off your mansion’s balcony and turn it into a desk, there’s no telling what you’ll get.  Chances are, it will look something like the 15-Baluster Desk, whose legs are inspired by balustrade railings found across France during the Renaissance era.

According to Restoration Hardware, the design of the legs are based off a salvaged wooden balustrade from that period, which is believed to have once flanked the stairway of a courtyard in the French city of Lyon.  While the idea of balusters on a table sounds silly, the result is surprisingly courtly — like a perfect desk for the billionaire CEO with absurd dreams of grandeur.

As if the idea of 15 balusters as your table’s base isn’t crazy enough, the 15-Baluster Desk  goes a step even further, using elm timber from the 19th century (reclaimed from antique floors and doors) to construct the top.  They used hand-turned solid elm for the legs, which is the same make and process employed to produce the original recovered railings. 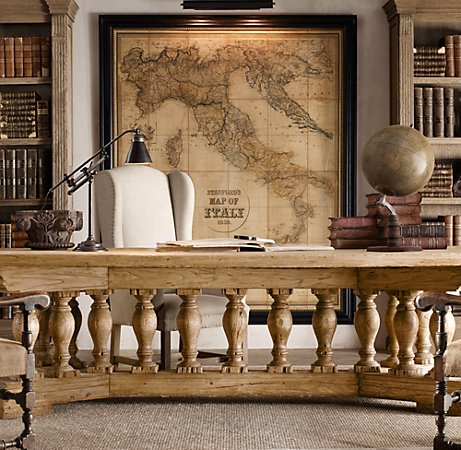 In case that’s enough to make you bust out the credit card, do note this thing is huge,  measuring 107 x 46 x 31 inches.  That means it can’t fit in that makeshift closet you call a home office, so better find a bigger space if you want to play Civilization V in a desk that looks like it came right out of one of those ancient cities.

Sadly, working like a billionaire CEO with absurd dreams of grandeur requires you to spend like one, too.  The 15-Baluster Desk is available for $3,695.