20 Coolest, Most Practical Multi-Tools You Can Buy Today

It’s not easy picking the best multi-tool, largely because everyone’s need for one is different. Will you carry it every day? How will you bring it around – in a pocket, in a key ring, or in a pouch on your pack? What do you need it for? On top of all those, you need to consider the tool’s durability, heft, and utility, along with how money you’re willing to part for one.

So, in putting together this list, we not only chose our favorite of the general-purpose multi-tools, but threw in a few choice tools designed with specific types of needs in mind. There may be no single multi-tool that’s perfect for everyone, but there should be one that’s almost perfect for anyone’s particular situation. 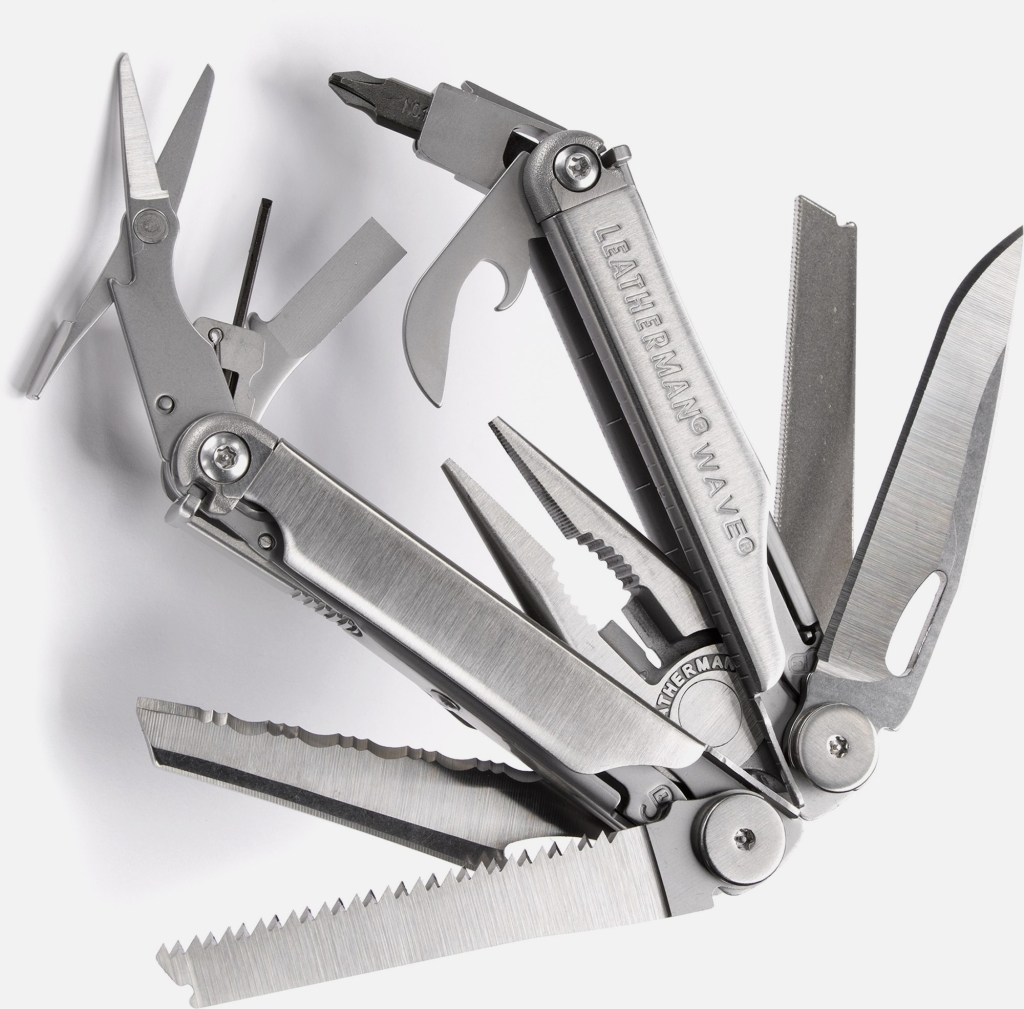 There’s a reason why the Leatherman New Wave is the most popular multi-tool on the market: simply put, it’s the perfect combination of the right tools with the right quality (100% stainless steel build) at a reasonable price. With 17 tools, including a sizeable 2.9-inch heat-treated stainless steel knife blade, very strong pliers, and four exterior blades that can be accessed without opening the tool, it’s the kind of do-it-all you won’t regret keeping, whether in a pouch during hiking or in a drawer inside the house. If you were giving out a multi-tool as a gift, this is the can’t-go-wrong pick. 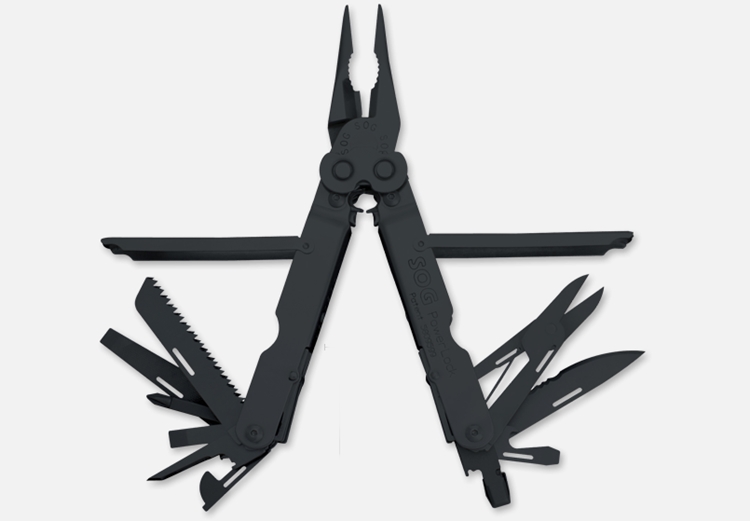 If you’re looking for a full-size multi-tool, there are few that can beat what the 7-inch SOG Powerlock 2.0 brings to the table. It’s built rugged (all-steel construction), packs an array of tools (22), and boasts an industrial-grade design that makes it suited for field work and outdoor adventures alike (it’s GSA-approved). Tool set includes pliers, a crimper, a wire cutter, a double-toothed saw, a three-sided file, multiple drivers, spring-loaded scissors, and more. It also features SOG’s Compound Leverage tech (which employs multiple pivot points for greater handle travel when using the pliers), two assisted-open blades, and a modular design that allows you to replace any of the installed tools, with individual components priced at under 10 bucks apiece. 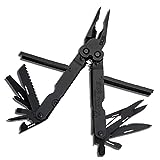 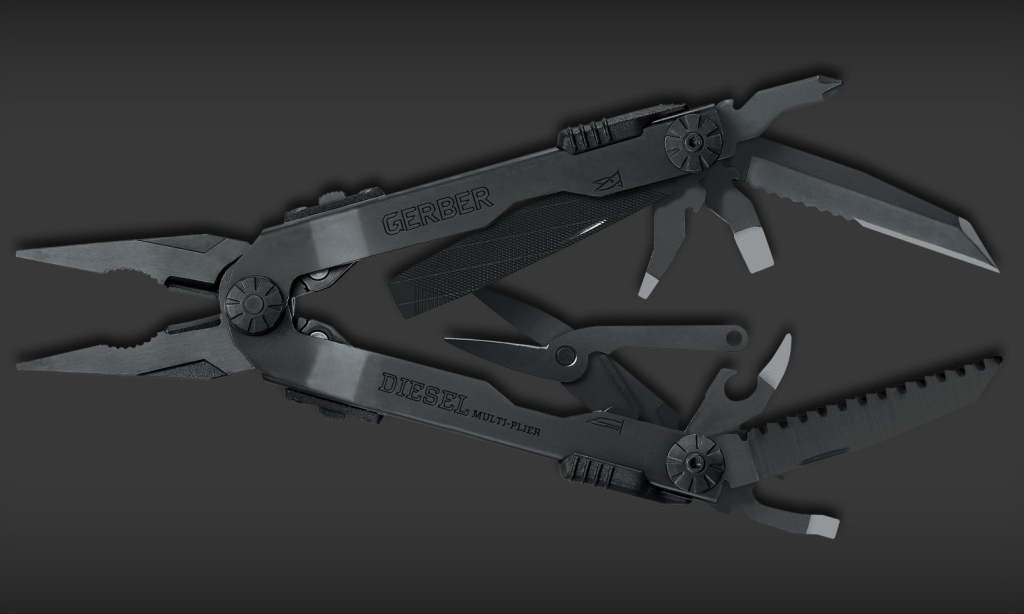 When it comes to toughness and functional utility, the Gerber Diesel easily counts as among the best in the multi-tool world. That said, though, it suffers from one glaring flaw, in that, it requires the pliers to be opened before any of the tools can be accessed – a big inconvenience compared to the now-standard exterior blades. If you can get past that sticking point, though, this is quite the handy little helper, with 12 stainless steel tools, a strong locking mechanism that ensures safe use, and a thick strong knife blade that helps give your cuts some much-needed force. 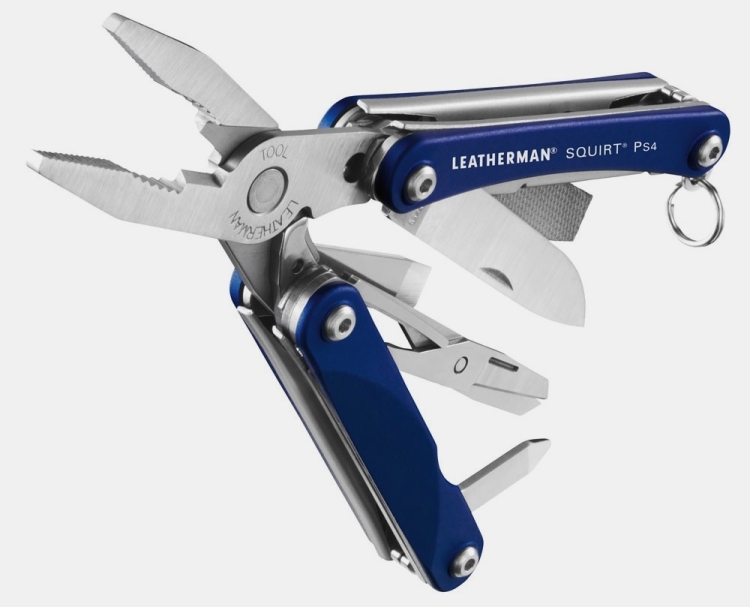 If you prefer keeping smaller multi-tools around that you can clip onto a key ring, the Squirt PS4 is as rugged and versatile as you might be able to find. Measuring just 2.25 inches and weighing 2 ounces, it packs two pliers, a 1.16-inch stainless steel knife, spring-action scissors, a metal file, three drivers, and the requisite bottle opener. Build is stainless steel for most of the unit, although the handle scales are built from aluminum to keep the whole thing lightweight. 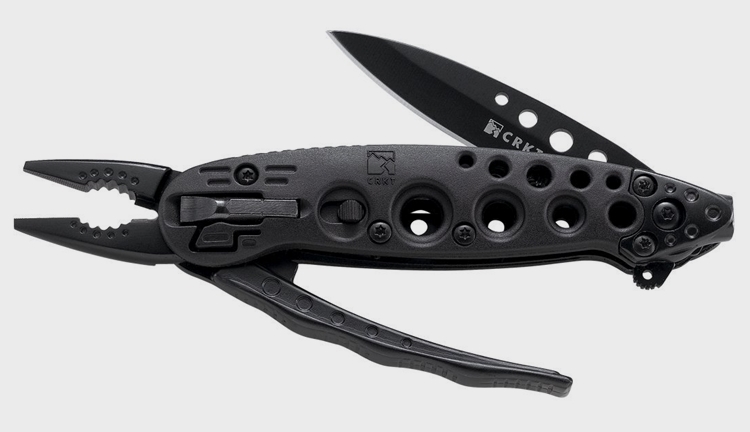 Big and affordable, the Zillatool sticks to the basics, combining just needle-nosed pliers, a wire cutter and stripper, a three-inch knife, and two detachable screwdriver bits (one Phillips, one flathead). That’s it. Why does it make the list? Because the tools that it does have all work like a beast – the pliers give a really firm grip, the spring-loaded knife blade engages quickly, and the whole thing is just well-designed. If you find yourself sticking to the basics with your multi-tools, this is the one to get. 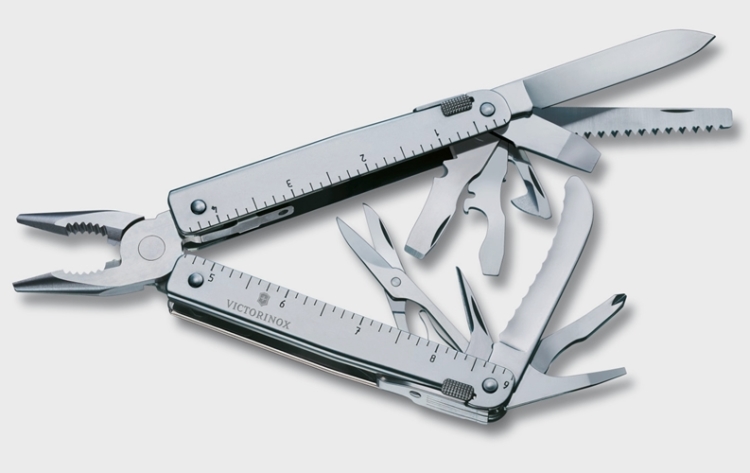 The first thing you’ll notice with the SwissTool RS is that its body is a metric ruler. Not only does that give it extra function, it makes for an attractive design, too. Victorinox deems it a “rescue tool” and it’s an extremely versatile one, with a whopping 27 tools ready to fold out of the outside handle, including a knife blade, screwdrivers, pliers, two wirecutters, benders, scapers, pry tool, and more. Measuring just 3.5 inches and weighing 7 ounces, it packs a lot for its size and, for the most part, gets things right. 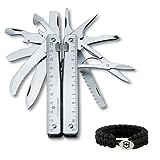 Victorinox Swisstool RS with Seatbelt Cutter plus...
Buy on Amazon 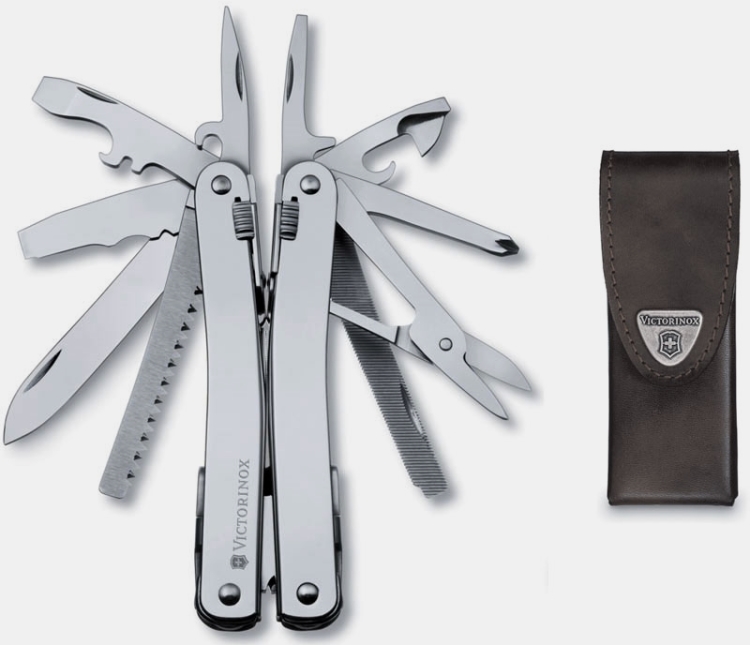 If it wasn’t so expensive (especially on retail), it’s possible that the Swiss Spirit X could have become the most popular multi-tool around today. With 27 tools (including needle-nose pliers, multiple drivers, scissors, two saws, pry tool, and more) packed inside a satisfyingly-sized frame, it’s surprisingly lightweight, making it more comfortable to carry than popular options like the Leatherman Wave. The Swiss construction is another plus, as you can feel the difference in craftsmanship when pit against many of the other multi-tools in this list. If you use your multi-tool everyday whether for home, work, or recreation, the extra money the Swiss Spirit X demands might well be worth the investment. 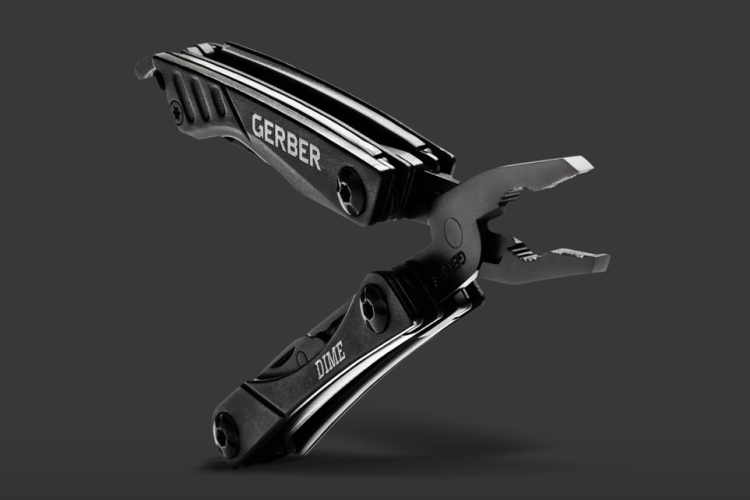 Probably the closest competitor to the Squirt PS4 (some even say it outclasses the darn thing), the keychain-sized Dime packs 10 tools, including pliers, a fine-edge blade, scissors, a package opener, a wire cutter, two drivers, tweezers, a file, and a bottle opener. The build is surprisingly strong for a current-generation Gerber product, with very functional tools, although the scissors are a little too small for any actual utility. 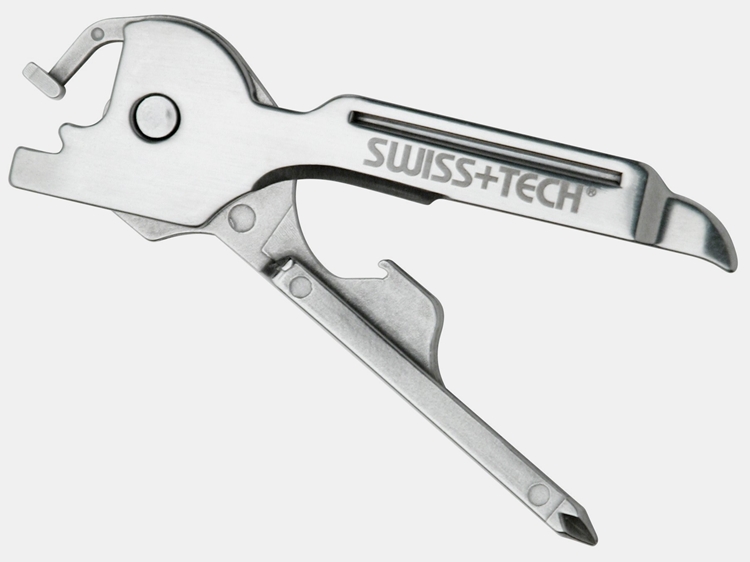 Described as “the smallest and most compact multi-use tool ever developed,” the Swiss-Tech Utili-Key XT 8-in-1 literally looks like a regular key when folded up. Despite the minuscule size, it bundles eight useful tools, including three screwdrivers (flathead, Phillips, and micro), nail file, nail cleaner, wire cutter, wire stripper, and a bottle opener. More impressively, the 90-degree angle handle position gives the all-stainless steel tool enough leverage to accomplish most any minor tasks. 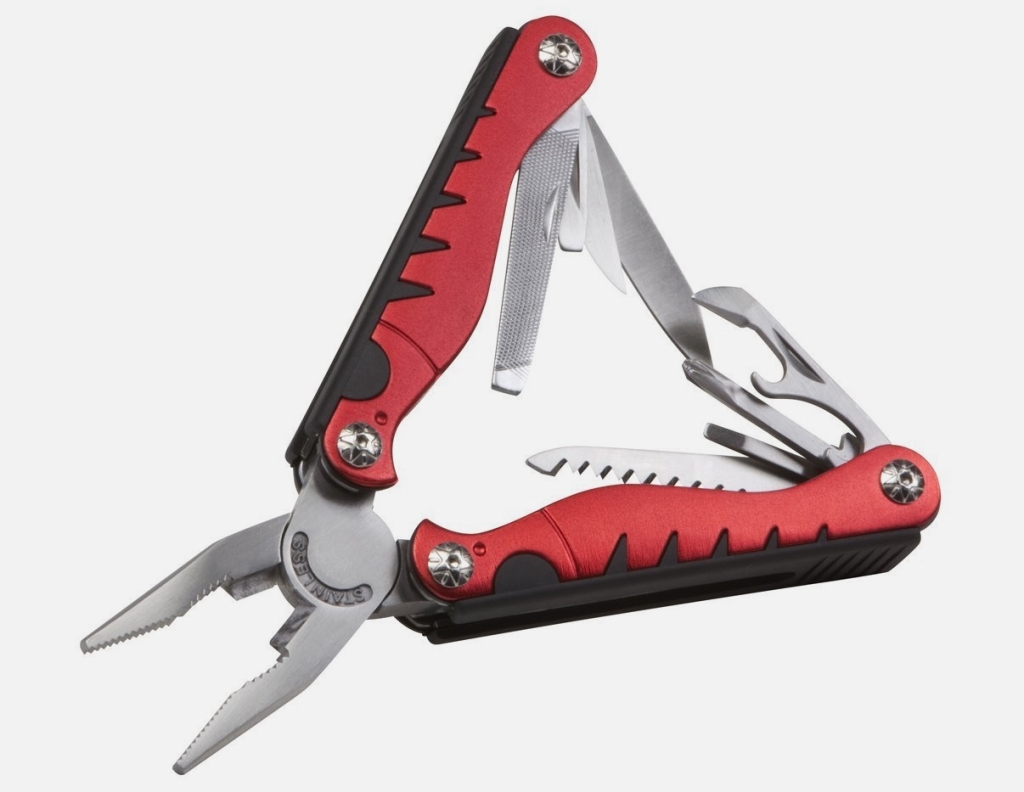 Tekton isn’t exactly the biggest name in multi-tools. In fact, the Tekton 10-in-1 isn’t even the best you’ll find either. With 10 stainless steel tools, spring-loaded anodized aluminum handles, and non-slip grips, though, it’s a veritable bargain at the $13 price. The steel is not quite cut out for heavy-duty work, but for those who take out their multi-tools sparingly, an inexpensive one like this might be all you actually require to get those occasional jobs done. 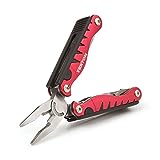 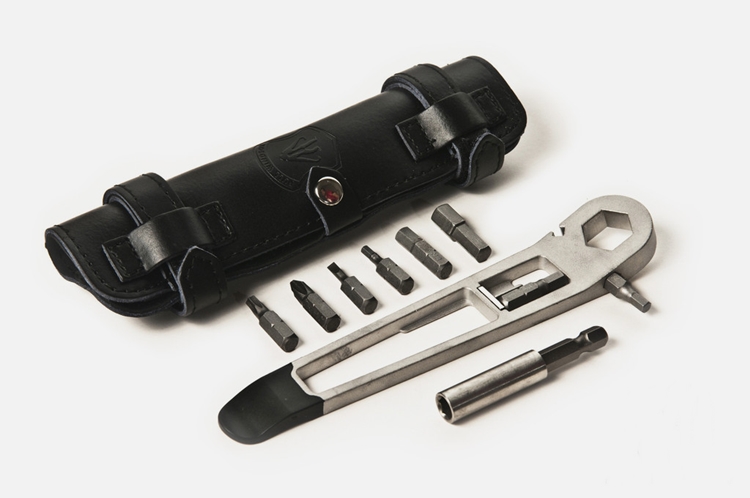 A tire lever is usually something a cyclist carries separately, since the darn things are too big to integrate into most bike multi-tools. The Nutter takes the tire lever and turns it into full-fledged bicycle do-it-all that works as a hex wrench, a Torx tool, a screwdriver, and even a bottle opener. Yes, it’s bigger than most multi-tools, but that also means better leverage – something many cyclists struggle with using smaller rigs. Plus, since most cyclists will carry a tire lever anyway, it seems like a smarter alternative than carrying a lever and a separate multi-tool. An upcoming version, called the Breaker, takes the Nutter’s design and adds a chain breaker, making it an even more complete system for riders to bring along. 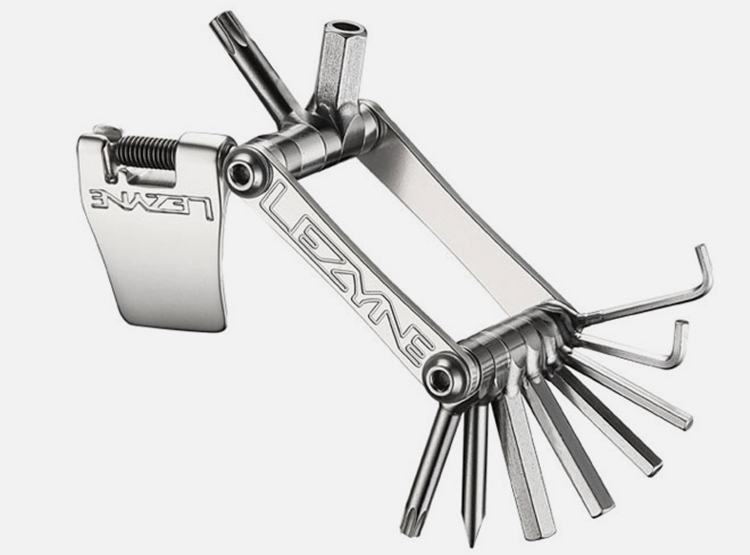 Built for cyclists, the SV11 comes with 11 tools for on-the-road repairs: seven hex wrenches, two Torx tools, one flathead screwdriver, and a chain breaker. It’s a near-complete set that lets you adjust, practically, anything on the bike that you’ll need to mess with mid-ride, with decent-enough leverage that you can actually get things done (albeit, with extra force necessary). Just pair it with a good tire lever and you should be able to ride without any worries. Design is compact and the build is strong, so you do get what you pay for, considering it’s one of the pricier offerings in its class. 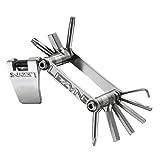 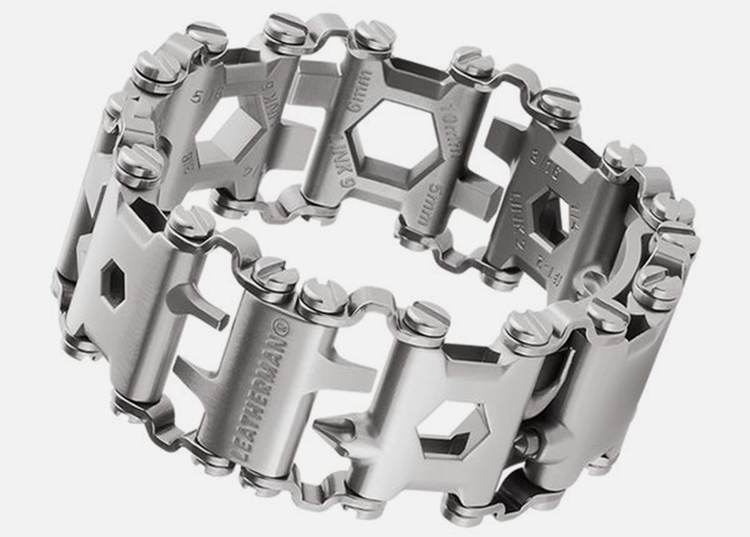 Probably the most original form-factor ever made for a multi-tool, the Tread is fashioned as a reasonably-attractive bracelet. Yep, it’s a wearable multi-tool made up of multiple stainless steel links that bundle two to three tools apiece, totaling to a whopping 25 tools. You can remove links if you have a smaller wrist, as well as use it as a watch band. To use the tools, simply take the band off and fold it so the tool you’re using is facing up, using the rest of the assembly as a handle. 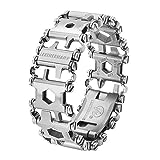 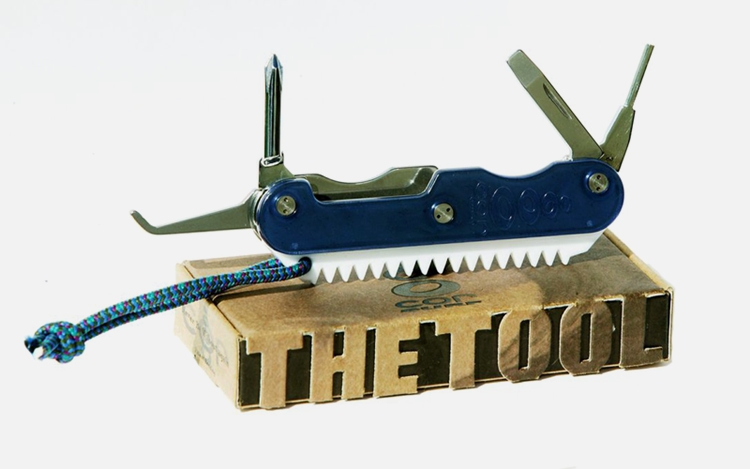 Yes, someone made a multi-tool for surfers. Created by Cor Surf, it takes on the classic Swiss Army knife form factor, with a fold-out fin key (Allen wrench), Phillips screwdriver, and flathead screwdriver on one side, as well as a wax comb with a lanyard hole on its opposite. It doesn’t look like the most rugged tool with the toughest build, but for the kind of light applications you’ll need at the beach, this should be just fine. 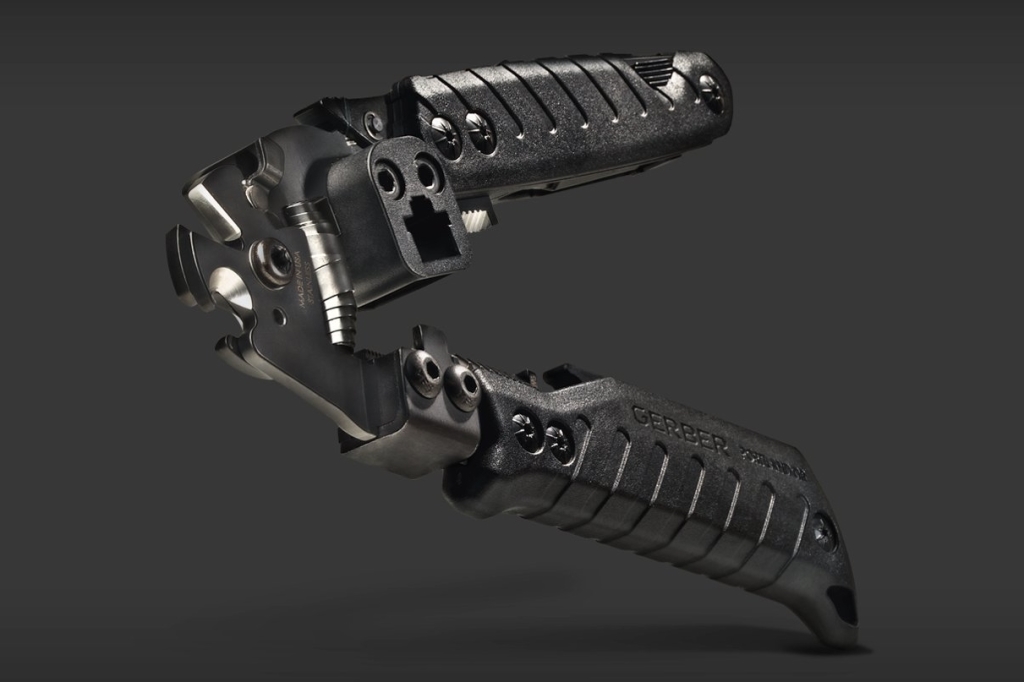 Originally developed for military communications personnel, this is the multi-tool of choice for anyone who works with lots of cables and wires, whether in the field or in the office. Seriously, this is a veritable one-stop shop, with its spring-loaded wire and cable cutters, CAT5 jacket cutter, RJ45 crimper, wire strippers, locking combo-edge knife, and multiple drivers with detachable bits. We are surprised with the omission of pliers, though, because it seems such an obvious thing to have one. Despite that, it’s a unique offering with a very niche, but very real, market. 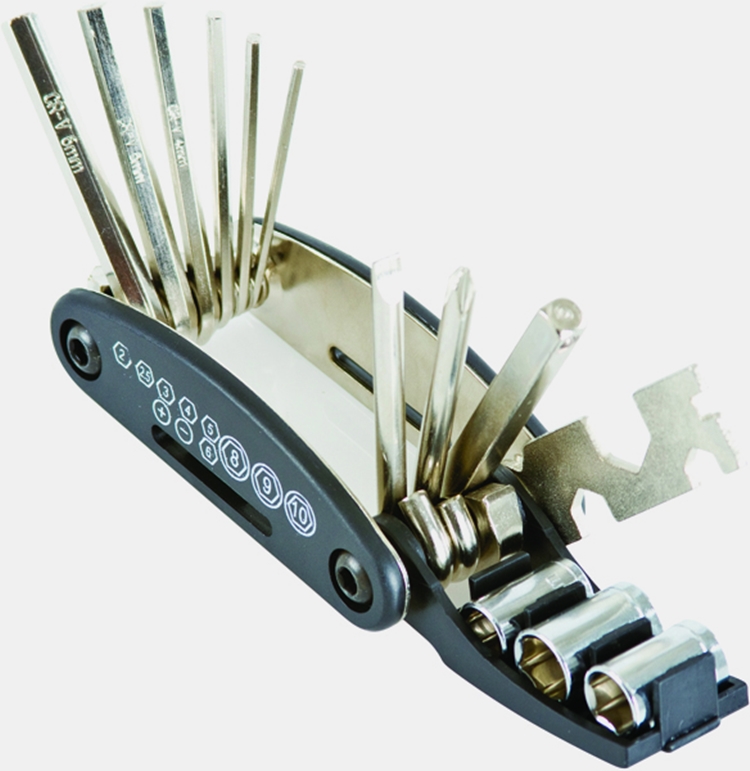 Given the amount of equipment DJs carry from gig to gig, a dedicated multi-tool definitely makes sense for fixing cases, trussing, stands, and other gear. It comes in the form of this unimaginatively-named tool from KPODJ, which contains two screwdrivers (flathead and Phillips), a socket hex wrench rod with three sockets, six hex key wrenches, a 14 GE wrench, and a solid three-size wrench tool that all fold down to a compact 3.5-inch long tool. 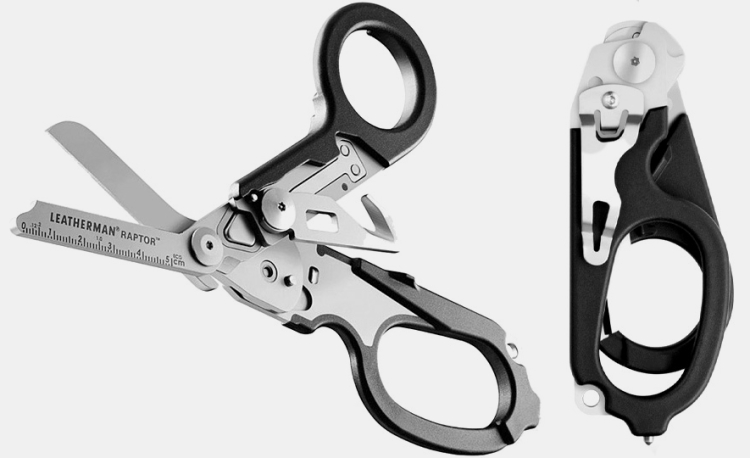 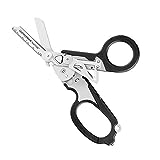 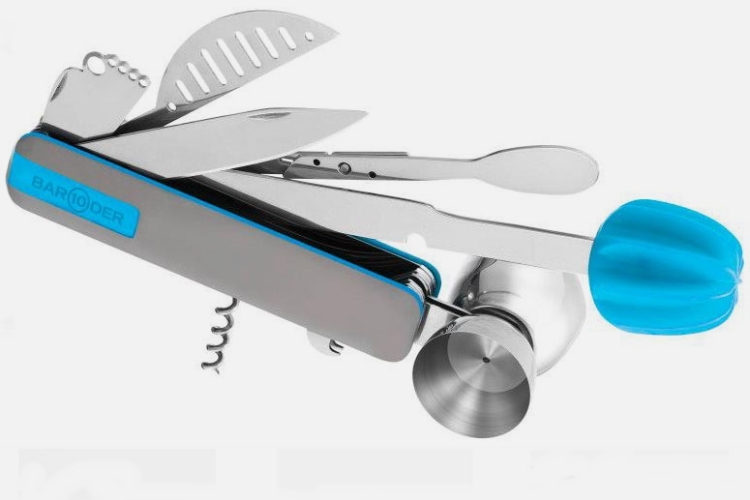 A multi-tool for mixology fans, the Bar10Der is a 10-in-1 package that bundles essential bartending tools in an 8.75-inch rig. Ideal for setting up an impromptu cocktail party, it comes with a muddler, a reamer, a channel knife, a jigger, a zester, a 4-inch knife blade, a stirrer, a strainer, a corkscrew, and a bottle opener, giving you everything you’ll need to prepare, mix, and serve a tasty drink. Well, if you paired it with a shaker and a cocktail glass, that is. 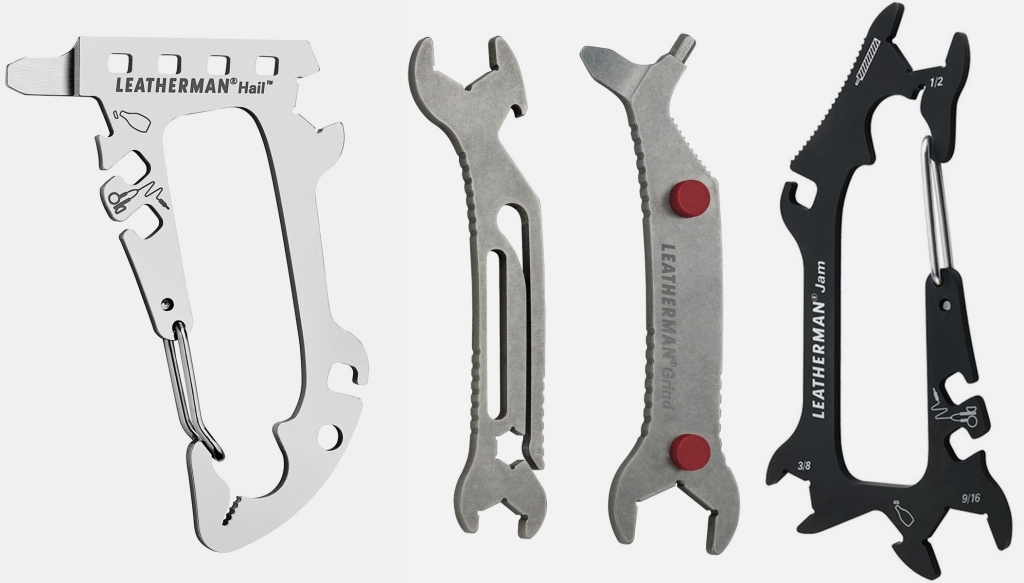 We grouped Leatherman’s action sports offerings here, each of which were developed in partnership with pros in their respective fields. Hail is aimed at snowboarders, bundling a scraper, bottle opener, screwdriver, wrench, earphone storage, and carabiner; Grind and Jam are both aimed at skaters – the former packing eight tools (grip tape file, three wrenches, two screwdriver bits, a quarter-inch hex bit tool, a truck key, and a bottle opener) and the latter with five (grip tape file, three wrenches, and a bottle opener). 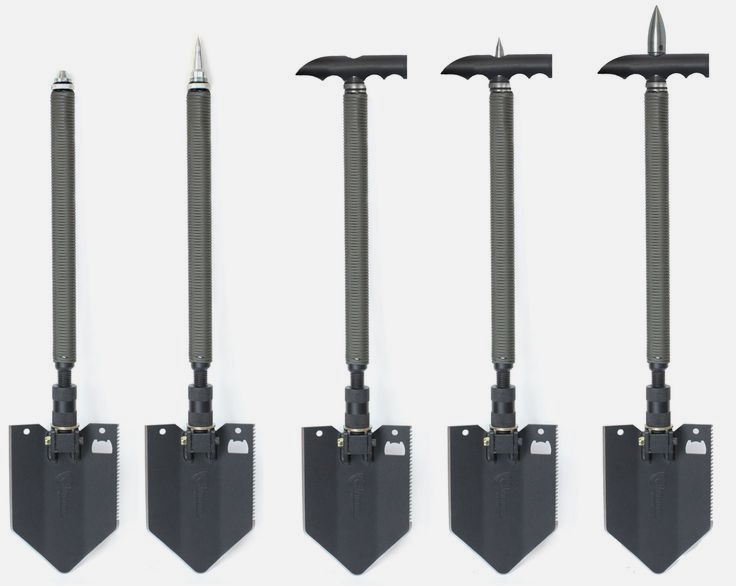 A heavy-duty outdoor multi-tool, the Crovel Extreme 3 combines a shovel with one flat edge and one saw tooth edge, a 14-inch hollow steel handle for storing your gear, a hammer/crowbar combo at the head with an integrated nail puller, and 15 feet of 550 paracord wrapped around the handle that you can pull out whenever it’s needed. The shovel head also comes with a locking system that lets you align it at either a 45- or 90-degree angle. It’s way, way, way less portable than any other set in the list, but if you want a really strong multi-tool for heavy-duty jobs, this is pretty killer.