2009 Edition Rolex Diamond Daytona Brings Back The Bling, Slaying Every Other Luxury Watch In Sight 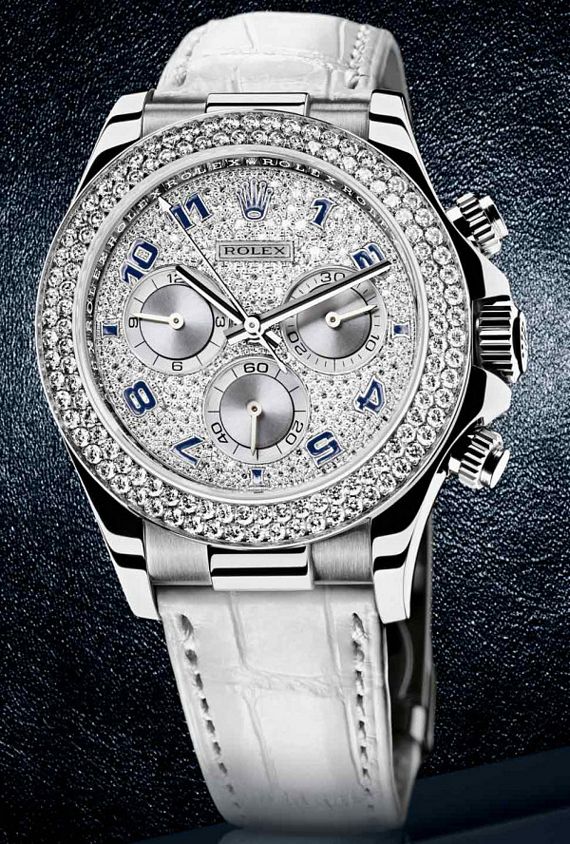 Has there ever been a cooler Rolex than the Cosmograph Daytona?  Arguably the watchmaker’s most iconic model, there was a time when sporting one on your wrist meant being at the top of the world.  While the Rolex Daytona’s appeal is no longer as big of a deal as it used to be, there’s no denying that it remains one of the most beautifully decadent watches known to man.

Every few years, Rolex revives the Daytona with limited edition diamond numbers that have become huge collector’s items.  This year, the company is releasing two Diamond Daytona models, both sporting the same classic looks and impeccable finish, to add to the line.  Looking as blinged out as the craziest bejeweled rappers, the watches come decked in white gold and white alligator straps, with enough shiny stones to blind you into a coma.

Officially called the (brace yourself) “2009 Rolex Oyster Perpetual Cosmograph Daytona White Gold Diamond Chronograph,” there’s not much that sets the two watches apart.  The first one comes with Roman numerals on the dial while the other one displays Arabic numbers across its face (with a few additional rubies on the bezel).  Other than those, they both boast of Rolex Caliber 4130 automatic movement (a 290-component chronograph), hidden inside a pave dial (no metal visible – just diamonds) and emerald-cut accents covering the bezel.

No one ever accused Rolex of making watches that blend in and this thing stands out no matter what you wear with it.  Suffice to say, every blinged-out rapper will bow his head in shame for he is wearing a lesser timepiece.