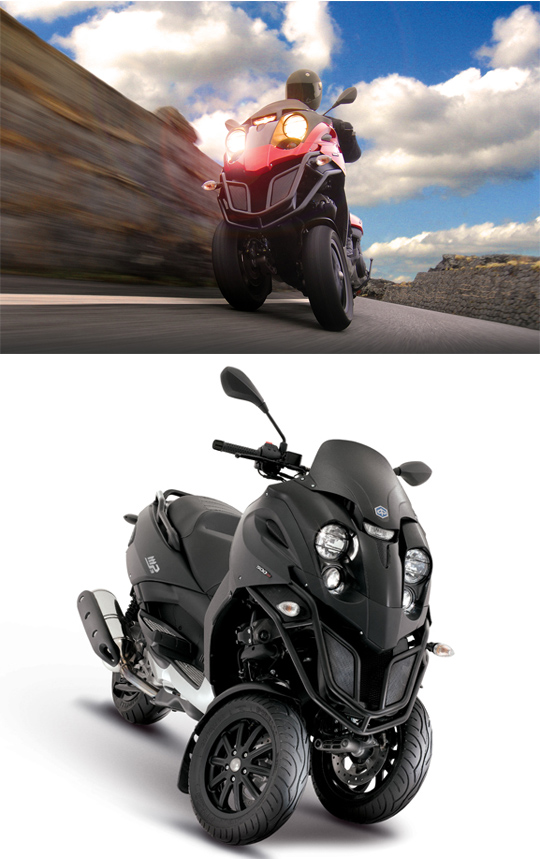 If you thought scooters can’t attract the same attention as a 1000cc hog, the 2009 Piaggio MP3 500 just might be the ride that changes your mind.  The aggressive-looking, fun-riding three-wheeled maxi-scooter takes the conventional idea of a cool motorcyle and turns it over on its head.

Scooters have long been one of the most ideal transportation options for lone-riding motorists. Yet, many parts of the world still see a lack of adoption for the mild-mannered two-wheeler.  Whether it be their lack of power or the flimsy appearance that turns the majority of people off, Piaggio’s MP3 series has long made a good case for redefining cool on the road – and the larger, meaner-looking model 500 makes sure it can’t be ignored.

Unlike full-fledged motorcycles which come with a manual gearbox that you’l need to master, the MP3 500 rocks a step-less CVT transmission, spurring the ride to move with just the twist of a throttle.   With a top speed of 89 mph and a 0 to 60 of 9.7 seconds, it ain’t too shabby in the power department either.  It’s real claim to fame, of course, like its smaller brothers, is the tilting parallelogram front suspension design, which allows it to lean to one side, without ever getting in danger of keeling over.

With its two front wheels, the MP3 500 is one of the safest maxi-scooters around, ensuring the bikes never falls down even after running through pot holes, humps or steel plates.  There’s no need to even put your foot down when at a stoplight, either, as the wheels can straighten out to hold the thing vertically even at a standstill.  Physically, it’s one of the most attractive scooters you’ll ever see with those well-defined lines.  Hell, you can pretend it’s Batman’s bike and I’m sure more than a few kids will believe you.

It’s a great alternative to a dorky econocar if gas mileage is an issue to you.  While it isn’t cheap at $8,899, it’s one ride that will definitely stand out, whether you’re banking it at a corner or just waiting out a red light.

[Piaggio USA via Be Sportier]