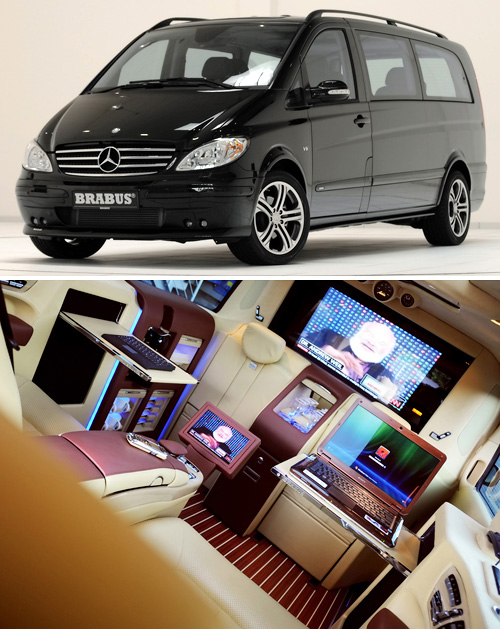 Don’t have room in your apartment for either an entertainment center or a home office?  Consider getting a van and decking it like the 2010 Brabus Viano Lounge, a concept vehicle that turns the erstwhile Mercedes-Benz van into a multi-purpose luxury space.

While only a concept, it shouldn’t be too difficult to mimic what the company did here.  Just throw a wad of cash around, buying all sorts of electronics systems, and pay a tuner to install everything similar to what they did to the 2010 Viano in the picture.

The van itself is equipped with a 428bhp 6.1-liter V8 engine, allowing it to manage a 5.9-second 0-to-60 acceleration time and an electronically-limited top speed of 155mph.  That’s not the real star of this show, though.  Instead, the Viano Lounge’s most remarkable features are installed right around the rear, turning the family ride into a loaded multimedia haunt.

Designed to provide a range of creature comforts for two passengers, the compartment sports a pair of leather-upholstered power recliners, similar to the plush seats found in business-class flights.  A center console rests between the two, allowing you to control all the snazzy electronics installed in the compartment.  There are also a couple of electronically-deployed emergency chairs, in case some friends suddenly decide to drop in.

What exactly did Mercedes install there?  The Viano Lounge rocks a 32-inch LCD HDTV (with a digital TV tuner), two Sony Vaio laptops, a PS3 and a custom-designed Dolby Surround sound system.  Numerous cameras are installed in the exterior of the car, all of which you can monitor in split-screen mode on the TV, as well.  There are onboard refreshments too, courtesy of an integrated ref and a Nespresso machine.  Left your phone in your room?  Not a problem, as they threw in a luxury Vertu mobile handset right there on the console.

The 2010 Brabus Mercedes-Benz Viano Lounge is obviously not for sale, so there’s no price tag tacked on to it, for now.  I totally want the same thing in my shitty Japanese van, though, not that I’ll actually be able to afford it.