Convertibles are awesome – when the top is off. Once that roof comes down, the whole thing can feel severely cramped, far from the luxury vehicle it’s supposed to be. The 2011 Mercedes Benz E-Class Cabriolet thinks it can do something about that.

Unless you live in an area where days are always warm and still, it’s silly to be driving a convertible with the roof off most of the year. Not with the stylish new drop-top, though. The company claims it’s perfect for “four seasons, four people,” allowing comfortable use for a party of four, even after the summer is through.

How did they do it? Gadgets, of course.

The Mercedes Benz E-Class Cabriolet comes with an Airscarf system that blows warm air to front seat passengers via adjustable vents in the head restraints, allowing you to stay warm with the top off, even in chillier climes. Wind gets a little too much for folks in the backseat? An Aircap wind deflector on the edge of the windshield can rise as high as 2.5-inches vertically, pushing airflow higher than usual.  According to reviews, it makes for relaxed conversations even at 70 mph. 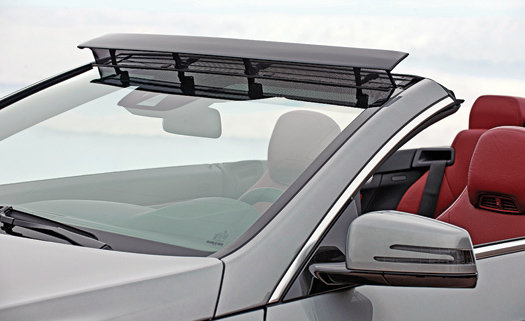 Despite the soft-top roof, it seeks to deliver enough sound-dampening and warmth, using an inch-thick material made up of three layers of polyester weave, padding and mesh. At speeds of up to 25mph, it can either open or close in under 20 seconds too. Two models of the car will be available – the E350 (268-horsepower V6, 0 to 60 of 6.3 seconds) and the E550 (382-horsepower V8, a 0 to 60 of 5.1 seconds). Both get a seven-speed automatic transmission and a top speed of 130mph.

Sales of the 2011 Mercedes Benz E-Class Cabriolet are slated to begin sales in the US during May.