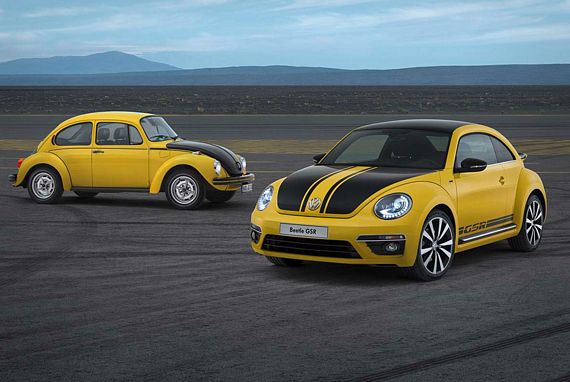 Before the second generation VW Beetle came out, one of my friends had his heart set to get one, no matter how it looked like.  When it actually came out, he passed — the design was just geared a little too much for women for any dude to seriously want it.  The third generation Beetle did change that, but if you want something sportier, this is probably the one you want: the 2014 Volkswagen Beetle GSR.

Based on the 1973 limited-edition racing version of the iconic vehicle, the new car reinterprets the classic for the modern era, packing performance features that bring it up to date with today’s class of sporty compacts.  Like the original “Yellow Black Racer,” the new GSR comes in a striking two-tone color combo, with predominantly yellow body and bumpers paired with a predominantly black hood, trunklid, roof, and exterior mirror caps.

The 2014 Volkswagen Beetle GSR is powered by a 2-liter, 4-cylinder turbocharged EA888 TSI engine that generates 210 horsepower and 207 pound-feet of torque, allowing it to hit a 0 to 60 in just 6.6 seconds and an electronically-limited top speed of 130 mph.  More notably, the engine can deliver the peak torque even at 1700 rpm, making for effortless acceleration at all gears.  Features include a six-speed manual transmission (optional dual-clutch DSG auto), 19-inch “Tornado” aluminum-alloy wheels, Bi-Xenon headlights, a big rear spoiler, a panoramic sunroof, three-color ambient lighting and a Fender Premium Audio System.

Just like the original GSR, only 3,500 units of the 2014 Volkswagen Beetle GSR will be made, ensuring it will be a valuable collectible just like its predecessor.  It goes on sale in the Fall at an undisclosed price.