Japan Is Building The Chuo Shinkansen, A 300MPH Levitating Train 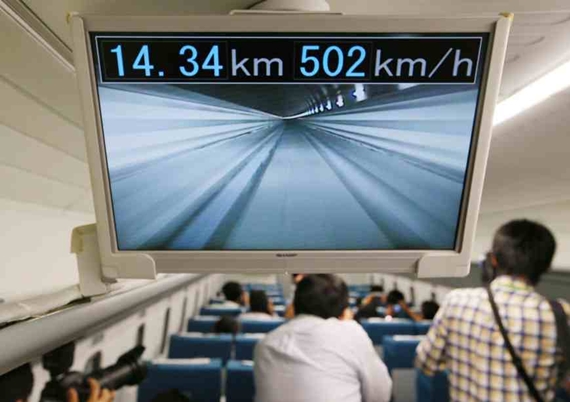 Japan’s about to reclaim the title for the fastest train in the world.  The country’s government just approved a plan to build a new train that uses magnetic levitation technology to send it soaring through the tracks at ridiculously high speeds.  Unlike their existing bullet trains, which travel at top speeds of 200-plus mph, this new one, called Chuo Shinkansen, is expected to fly through the tracks at top speeds of over 300 mph.

The new train will be used on a 180 mile stretch of track between Tokyo and Nagoya, which the existing bullet trains currently complete in about an hour and forty minutes.  With its leveled-up top speed, the 300mph maglev train is looking to clear the same distance in as little as 40 minutes.  Seriously, that’s a full whopping hour of time saved.

Central Japan Railway (aka JR Tokai), which will own and operate the Chuo Shinkansen, is currently demonstrating the magnetic levitation technology that will be used for the new locomotive at a test track outside Tokyo.  The train cars will start off running on tires, before levitating around four inches above a concrete pathway after it hits a certain speed, allowing it to travel with dramatically reduced amounts of friction.  Japan has been testing maglev trains since 1997, with the test vehicles posting top speeds of up to 361 mph on trial runs.

The catch?  It’s won’t be coming soon enough.  The Chuo Shinkansen isn’t expected to be in service until 2027.