Big Brother Soon To Watch You In Full 360-Degree Views 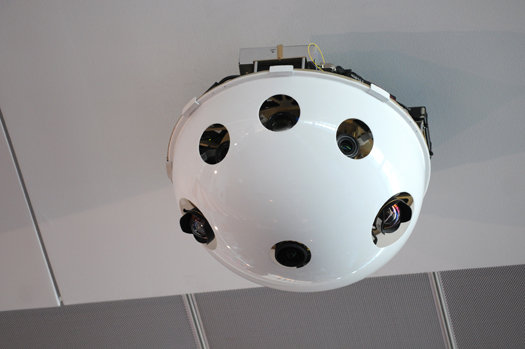 We all know Big Brother is watching.  It’s always watching.  Yes, we’re referring to the conspiratorial conglomerate that are controlling the world from behind their armchairs in the shadows, whose life’s work of watching your every move is about to get easier with the Imaging System for Immersive Surveillance (ISIS), a new 360-degree, 100-megapixel satellite video surveillance.  For reals.

Currently under development by the Department of Homeland Security’s Science and Technology Directorate (S&T), the all-seeing spying device can stitch together 360 degrees of video, allowing it a full view of entire rooms (and, theoretically, entire cities).  Even better, it can keep its eye on a full landscape, all while allowing operators to zoom in on particular subjects within the range.

Rather than invent anything that’s borderline magical, the ISIS manages its capabilities by combining several video surveillance technologies into a single package, kind of like what McGyver would have done back in the day.  Each module actually packs multiple sensors and cameras, images captured from which are stitched together at the backend in real time, forming a large, panoramic 100-megapixel feed (a resolution equivalent to about fifty 1080p movies).

Since it’s still in the testing and development stages, there’s no fixed range yet for how far the device can record.  Aside from the panoramic stitching, other software features being developed for it include creating and monitoring exclusion zones, tagging targets throughout their movement across the landscape and other scary surveillance applications.

An ISIS prototype is currently installed at Boston’s Logan airport, where it’s being put through the real-world grind.