Watch: 500-Meter Slackline Walk Of Horror Over The Utah Desert

Yes, we’ve seen longer slackline walks than this 500-meter daredevil romp on the Utah desert. None of them, however, were done at this kind of height, where falling off the line is likely to lead you to certain death. I mean, watching the darn walk is horrific – we can just imagine actually doing it.

Shot by Camp 4 Collective, the video shows French extreme athlete Theo Sanson performing the daredevil walk across two desert towers in Castle Valley – one of the most spectacular desert landscapes in the world. The line was rigged from the Rectory to Castleton Tower, the entire length of which Sanson bravely traversed. Granted, he was harnessed the entire time (looked like it anyway) so the chances of actually slipping and falling to death were as small as it can get, but it’s still a wildly impressive feat. 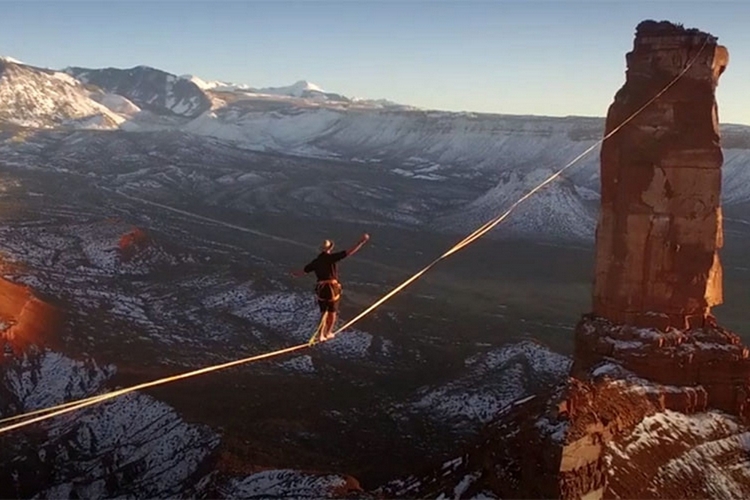 Because the line was so long, you can see it sagging very low with plenty of side to side instability, especially towards the halfway part. My palms and my knees buckled a bit watching that. Sanson overcame all those, of course, proving once again why he’s considered one of the best slackliners in the world. At this point, I don’t even question how he was able to do it (he’s obviously wired to do this kind of thing). My question is: how the heck did the riggers set up that slackline on those two towers? I’m guessing that will make for an immensely engrossing video all on its own.