A Luxury Sailboat Fit For A Pirate…Arrrr 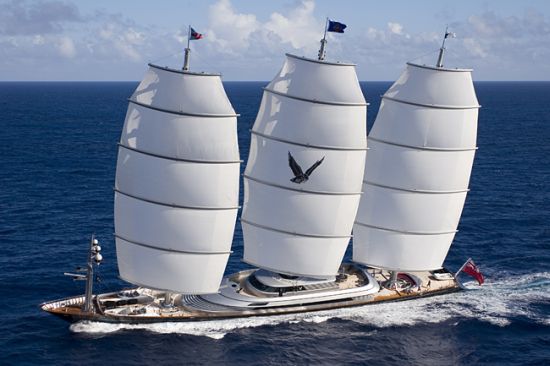 Got a spare $100 million tucked under the sheets somewhere?  How about shelling that out for this one-of-a-kind luxury sailboat currently on sale at JamesList?  Called the Maltese Falcon, it sports three huge masts that’s as close as I’ve ever seen a luxury yacht get to a real pirate ship.  Just stencil a crossbones logo somewhere on the sails and you’re good to go!

Everyone knows, of course, that any pirate worth his eye patch pillages the sea on sails instead of lame-ass motors.  Originally commissioned by American millionaire Tom Perkins (who’s not a pirate, by the way) back in 2006, the gorgeous yacht easily fits the bill, owning the reputation of being the world’s largest and fastest personal sailboat.

Measuring 289-feet long, you’ll have plenty of deck to tell your crew to come on to, along with enough chores to keep your band of criminals busy day and night.  The imposing free-standing masts measure 187 feet each and guarantee instant notoriety like no other.  A showcase of technology and design, the Falcon sports DynaRig under the hood and fiber-optic sensors for keeping track of environmental factors to facilitate better sailing.

It offers all the luxuries you can find in a typical luxury motor yacht, from opulent rooms for your men, large dining hall and separate studio areas.   The captain’s cabin is on the upper deck, which comes complete with a private cockpit, a protected sunbathing area (a tan pirate – yay) and direct access to the wheelhouse.

Show them seafarers how modern pirates should really roll – in style.  The Maltese Falcon is currently selling at a $138 million asking price, which unfortunately doesn’t include either cannons or a complimentary parrot.  You’ll have to procure both along with your wenches, separately.