Adidas miCoach Speed_Cell Can Monitor Stats On Your Dunks, Backhands 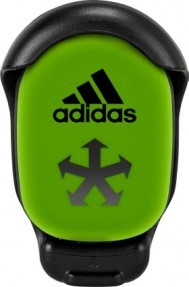 Runners and swimmers get all the good performance tracking gadgets.  But what about the folks who prefer to shoot hoops, drive backhands or kick balls into nets?  They need a way to measure their in-field numbers, too.  Well, they could use the Adidas miCoach Speed_Cell.

While the gadget can be used to monitor strides just like your Nike+, it will capture motion information in all directions, allowing it to gather data beyond the standard running motions.  That means, it will register kicks, jumps, rushes, dives and all sorts of movements that are more likely to be employed in sports like soccer, basketball and tennis.

The Adidas miCoach Speed_Cell is a dongle that slots into a cavity on the bottom side of miCoach-compatible shoes.  It can rack up to seven hours of stats on a full charge, recording speed, distance, time and other performance information.  All data are stored into the onboard memory, which can then be wirelessly transmitted to a smartphone, tablet or computer for viewing in-field performance.

Adidas has already released soccer cleats that can work with the device,  with plans to put out compatible footwear for basketball, football and tennis, as well.  Sport-specific apps will also be released for individual sports, so users can get metrics that are more significant for their purposes.

Athletes looking to track their performance numbers can pick up the Adidas miCoach Speed_Cell starting December 1st for $69.99.   Apps for runners and soccer players will drop on the same day, with the rest trickling out in the coming months.