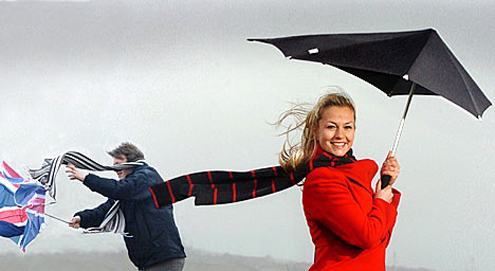 Unusually strong winds call for unusually sturdy umbrellas – and, no, an umbrella that pretends blue skies are upon you won’t be enough.  SENZ umbrellas are built for exactly that kind of weather, resisting strong gusts of wind like a cool cat brushing worries off its shoulder.

It won’t be the prettiest umbrella you’ll find.  In fact, it looks deformed, with one side purposely shorter than the other.  Far  from being a factory reject, though, the SENZ umbrella has been designed to prevent itself from being tossed inside out when the hard winds blow.

As it turns out, the angular structure of the SENZ is the way umbrellas should be if you want it to stave off winds of up to 70 mph (100 kph).  Sporting angles that force the air to flow around it (just like aerodynamic sports cars), your umbrellas won’t turn upwards, fly off uncontrollably and threaten to take you with it.   You’ll likely be laughing your way through the storm, while everyone around you struggles to keep hold of their protective rain equipment.

It  uses the sturdiest materials I’ve ever seen umbrellas tote, including nylon, steel, aluminum and fiberglass.  Other features include an oval shaft (for ample rain protection), an opening button on the handle and everyone’s disdain during frighteningly windy afternoons (anyone who’s not wet while I’m soaking deserves my wrath).

The SENZ umbrella comes in three sizes (mini, original and XL), available for $55, $69, and $83.  Suffice to say, if this umbrella gives out, you best get your ass back home, lest you want to be flying through the air like a paper plane. [can be bought at SENZ ]