Air Board, A Hovercraft That’s A Little Picky About Its Surfaces 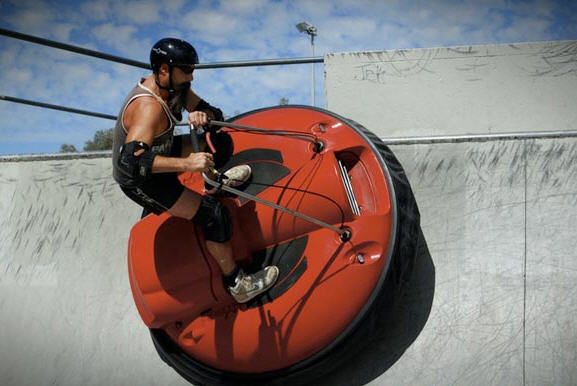 In the future, we’ll all be riding hovercrafts.  In the meantime, however, you’re going to have to settle for the Air Board, a slightly-hovering mobility device that looks like an oversized lawn mower.

Remember those “hovercrafts” they used at the Sydney 2000 Olympics?  This is it.  With plenty of surface restrictions and bulky as hell, it’s not exactly the most convenient ride either.  But, hey – it’s a taste of the future all the same. Looks amazing fun though. 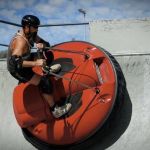 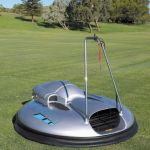 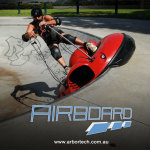 The Air Board can “hover” over roads at 15 mph, as long as they’re either concrete, grass (has to be mowed) or asphalt.  It can’t ride over water, sand, stones or dirt, which makes it useless everywhere else except in the park and in the middle of the street (at that size, people will beat you up if you take it to the sidewalk).  Since it’s not going to be road legal, you’ll be stupid to take it in the middle of traffic, as well.  Basically, it’s best if you just look at it admiringly since you can’t really use it anywhere (it weighs over 150 pounds, so forget about carrying it like a skateboard).

It comes with a lawnmower-like bar, where both acceleration and brakes can be activated, along with an automatic killswitch in case you fall off.  You can steer it by simply shifting your weight; once you get the hang of it, you’re supposed be able to perform 180 and 360 degree spins with ease.  You can load it with up to 1.3 gallons of gas, enough to last it a good hour.

While not exactly the hovercraft we envisioned for 2009, it’s a decent toy – if you can find enough suitable places to use it on.  You can score one for $14,000. Did I mention it looks like amazing fun!