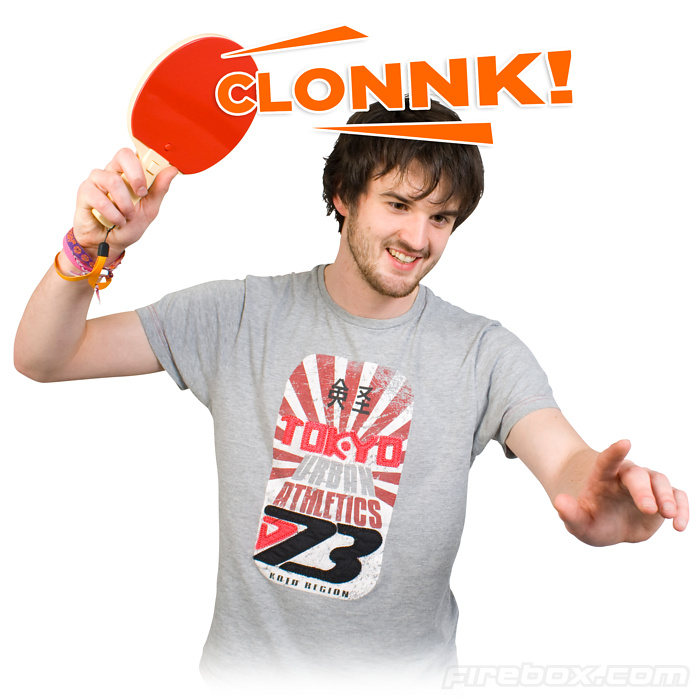 You want to play table tennis without actually setting up a table.  Or messing around with ping pong balls.  Or finding an opponent.  If you had a Wii, this Ping Pong Paddle Controller would have done the trick.  But you don’t.  Despair not, though, as there’s hope for you yet with the Air Table Tennis.

Made in Japan, this toy literally has you playing ping pong with an actual paddle.  Except without a table. Or a net. Or a ball.  Or even an opponent.  While that sounds ridiculous, the actual gameplay actually isn’t.  In fact, it might make for perfectly decent table tennis practice while you’re lounging in bed, staring at the computer pretending to read a report or relaxing in your Submarine Bathtub.

How does it work?  With Air Table Tennis, you play everything by the ear.  Armed with all the sound effects of an actual game, it makes a sound every time you hit the ball and another sound when your opponent swings back.  Couple that with the sound of the ball hitting the table and you can approximate when the ball is  in your vicinity so you can swing your racket again.

It doesn’t devolve into repetitive batting motions, either, as your virtual opponent actually cares enough to vary the speed of its swing.   I know, the game still sounds ridiculous, but the product page assures that it’s actually very intuitive, as you’ll quickly get the hang of approximating when the ball is within smashing range.   It comes with both Easy and Hard modes, too, as well as a Rhythm mode for practice (the virtual opponent swings with the same speed every time).