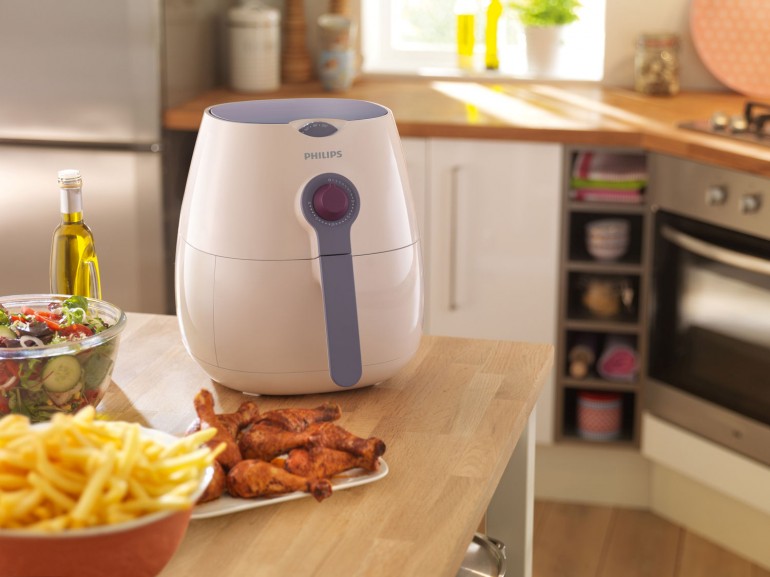 Making french fries without cooking oil may sound like a tragic joke.  That, however, is exactly what Philips promises with the new Airfryer, a kitchen appliance that fries food without a boiling vat of fat.

Calling Airfryer oil-free maybe just a little bit  misleading but this is how it works.  Airfryer uses the natural oil already in the food (meats will have plenty of them) to fry it into a golden crisp.  As for french fries, frozen varieties you can get from the grocery are already pre-cooked in some oil, so it uses whatever the strips have absorbed.  If you’re cutting the potatoes yourself, you’ll actually need to add half a teaspoon of cooking oil to make sure it cooks properly.  Still, half a teaspoon sounds mighty healthy compared to the typical alternatives.

The Airfryer uses Philips’ patented Rapid Air technology, which circulates hot air around the grill component to simulate the frying action.  No details have been given about how it actually works (my guess is voodoo magic), but they claim it produces perfectly browned and crisped dishes – just like oil and a frying pan.  Instead of ultra-fattening dishes, though, your grub will have up to 80% less fat.

Cooking takes an average of 12 minutes, which is quick enough to make oil-free frying a viable alternative.  It comes with a food separator accessory, so you can fry multiple items at the same time, without getting their tastes mixed up.  Temperature is adjustable up to 200 degrees C.

Philips claims they turned up a 75% approval rate during blind tests for food made using the Airfryer.  Sounds promising.  Even if the grub tastes just half as good as deep-fried crap, I’m totally buying one as soon as it comes out.  I’m never eating anything that’s not crisp, crunchy and golden brown again.