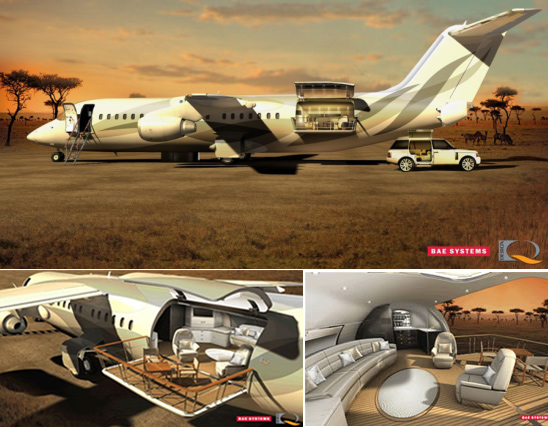 Airplanes with a balcony – that’s the striking new feature in two luxury concepts from DesignQ and BAE Systems. They call it Air Decks, a viewing platform where passengers can step out of their stuffy seats and enjoy the open air. Hopefully, while the plane is on the ground. Otherwise, I hope you took out life insurance.

Created for Avro Business Jet, the two concept planes consist of the Explorer One and Explorer Four, which the companies purport to be “a bold and innovative approach to aircraft interiors.” The highlight of both will be the aircraft rears, which have been totally transformed into a unique living space with a state-of-the-art entertainment system, a vast open-plan galley and the unique platform that appears when the huge side door powers open.

Why a viewing area? Since these are luxury planes, the idea is you’ll be landing it in picturesque places for sightseeing. With an open-air balcony, you can stay inside the comforts of the plane while enjoying the full view of your surroundings. Since it’s still a plane and not a teleportation machine, your surroundings will likely consist of an airport runway, though, so I don’t know how that’s supposed to be a good thing.

According to the press release, the ABJ Explorer One is targeted at “high net worth individuals” who want to explore remote locations in style and comfort, while the ABJ Explorer Four is designed for up to four couples, each one with their own private cabins. Obviously, each aircraft incorporates tons of luxury amenities, from plush interiors to equipped wokstations to fully-serviced living quarters.

Now, if only they can find a way to use the Air Decks during the middle of flight, I’d be really excited.  Imagine getting a suntan on your way to the Bahamas – brilliant!