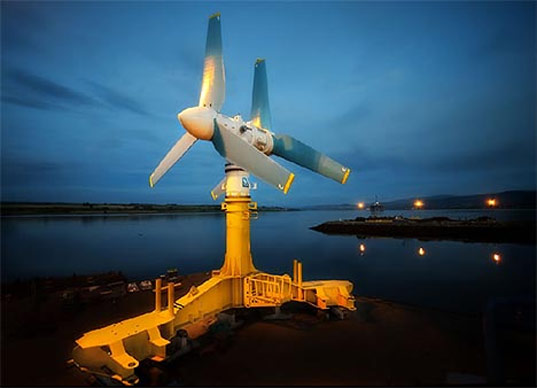 While it looks like a missile ready to run giant robot invaders to the ground (or a secret futuristic bicopter drone), the AK-1000 actually isn’t even a military weapon.  Instead, it’s a monstrous tidal turbine that will harness choppy waters into usable electricity.

Created by Singapore-based Atlantis Resources Corporation, the beastly structure isn’t an oddly-styled wind turbine as you’d probably first guess.  Instead, the single installation is meant to use the turbulent waters around Scotland’s Orkney Islands to generate power for up to 1,000 residential households.

When it goes up this summer, the AK-1000 will officially become the world’s largest tidal turbine, standing over 70 feet tall and weighing a massive 130 tons.  The double rotors on top measure 60 feet each and produce up to 1 megawatt of power every hour.

According to a recent announcement, the UK government is looking to harness tides around the country to generate enough energy to power around 1.4 million homes by 2020.  While some of the world’s larger wind turbines easily produce more electricity (some do upwards of 7mW per hour), the country appears to be favoring tidal turbines for its better predictability – you can have no days with no wind, after all, while sea activity should remain relatively the same.