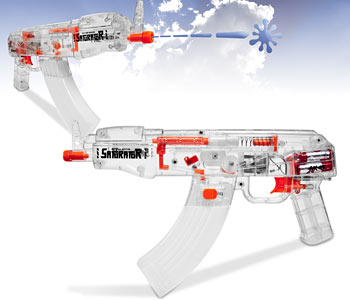 You’ve never had a water-pistol fight until you’ve traded stinging wetness like they exchange bullets in a battlefield. Enjoy fast-paced drenching battles with the AK47 Aqua Fire, a battery-powered automatic water gun delivering payloads at a rate of four liquid bullets per second. Ratatatat.

Unlike other heavy-duty water guns, this one doesn’t require you to waste time pumping air. Just put in the clip, aim and fire at will at your hapless coworkers. Once you’re out of ammo, simply run to the nearest drinking fountain and reload. You’ll have enemy combatants (and the entire office) soaked in no time. Even the threat of a two-week suspension can’t stop you. 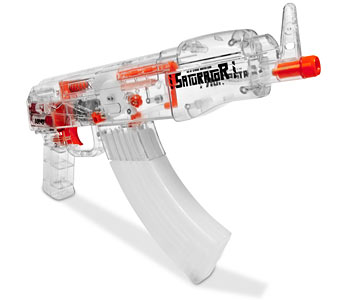 The AK47 Aqua Fire is a 33 x 23 x 4.5 cm water pistol, modeled after the original Kalashnikov. Clad in a uncolored, transparent plastic body, it’s every bit as good-looking as it is powerful. How much power does this pack? Unloading four water bullets per second, it can discharge an entire “clip” in just 60 seconds. Even better, it can rain down on opponents even at distances of up to eight meters, making sure your attacks carry out maximum damage.

Designed for ambushing friends playing in the schoolyard (read: for older children), it can be perfect for manchilds wreaking havoc in the office too. Remember that time you got fired? Wouldn’t it have been more awesome to go out in a blaze of glory, unleashing a torrent of water bullets while security whisked you away? Okay, maybe that’s a bad idea.