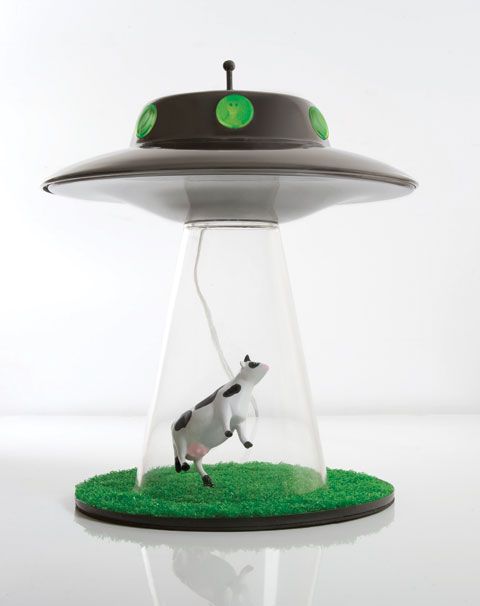 Ever been woken up by nightmares of an alien abduction?  This thing might be what gives you the fits.  Called the Alien Abduction Lamp, it’s a funky nightlight that depicts future hamburgers being snatched by a UFO.

The lamp features a cast metal UFO that looks faithful to science fiction images of alien ships as depicted in classic films and television shows.  A clear Perspex resin acts as the beam, shining down on the hapless bovine (removable, so you can replace it with Marlon Brando as the abductee if you feel like it) as it’s on the way of being pulled up to the craft.  The whole lamp stands on a circular, non-slip base with fake grass on the surface.

As for its illumination capabilities, the Alien Abduction Lamp employs a number of energy-saving LEDs under the spacecraft, ensuring sufficient lighting without using up too much power.  The flying saucer sports several windows, with glow-in-the-dark aliens peering inside a glowing green cockpit behind them.  A three-stage UFO antenna acts as the control, with ON, OFF and Pulse settings.

I’ve never seen the lamp before, although it seems like the design has been out there for a good two years.  Well, it’s finally hitting production now, with a first run of 2,000 pieces that you can sign up for today.