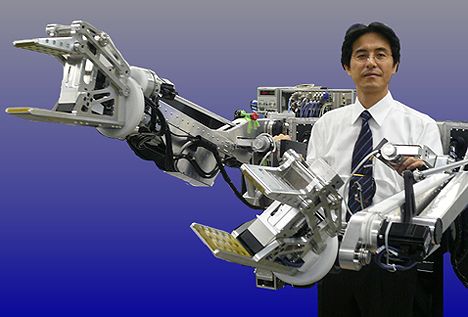 Why bother lifting weights when you can wear a robot suit that gives you superhuman strength?  Coopted right out of the classic movie, Aliens, the real-life Power Loader is a hydraulic exoskeleton that will help you lift inhuman loads (well, in future form) with a single flick of the wrist.

Currently in development by Panasonic subsidiary Activelink, the wearable robotic device tips the scales at 500 pounds and can carry as much as 220 lbs of weight with ease.  While that may not sound much (The Incredible Hulk should manage that with a single pinkie), it’s still in the early stages, so expect it to foster much higher numbers when it really does come to market.

Described as a dual-arm amplification robot, the Power Loader is built using an aluminum-alloy frame and operates using 18 electromagnetic motors.  It features a control area that interfaces with the robotic arms, sending instructions while receiving force feedback, allowing the user to better manage the device’s handling.

While the original Power Loaders from Aliens were employed for cargo-loading and heavy lifting aboard spaceships and colonies, these real-life reproductions are being geared for use in lifting tasks for construction and rescue relief missions.  Can you imagine being able to walk around wearing this thing?  Can you say Full-Size Robot Wrestling Olympics?

Activelink has its sights set on a 2015 rollout for a marketable version of the Power Loader.  No word on what the eventual target load is, but I hope it’s enough to lift a large truck, because I want to pile up neighborhood cars on top of one another just for the heck of it.