AlterG M300 Treadmill Lets You Exercise Like An Astronaut In Orbit 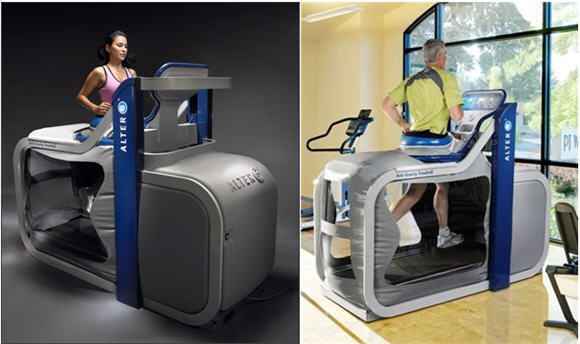 Why pay six figures to float in near space when you can do it everyday at home?  For only $24,500, you can take home an AlterG M300 series machine, an anti-gravity treadmill that lets you run like an unbathed astronaut.  Except you’re at home, so you can take a bath right after.

The company first showed off their anti-gravity tech (the P200 series) earlier this year, but priced it at three times that of the current model.  Sure 25 grand is no laughing matter, but for a machine that lets you float while you pretend to exercise, that sounds like a veritable steal (unless they let you use the facilities at astronaut bootcamp).

Originally developed at NASA, AlterG’s impressive-looking technology works by pumping air into an enclosure that surrounds your body from the waist down.  The increased air pressure buoys you up, allowing you to take steps like you were walking on air.  Supported weight caps off at 400 pounds, though, so if you’re built like Andre the Giant, even anti-gravity can’t help you.

Novelty isn’t the selling point either (though it’s a nice bonus).  Since the device lifts you up and removes up to 80% of your body weight, it allows people like injured patients and the elderly to exercise safely (by lowering resistance, as well as impact on joints and muscles).  As such, it’s heavily marketed towards sports teams (half of the NBA franchises are said to have at least one each) and medical institutions.  At the current price (and the monthly payment plans), even well-heeled geeks may be able to afford it too.