Always Innovating’s Smart Book Breaks Up Into A Bluetooth Keyboard, Tablet And MID 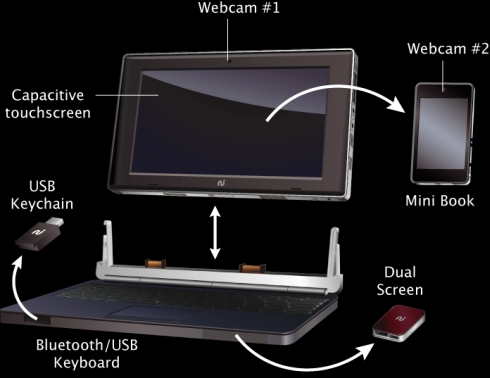 If Always Innovating didn’t ship their ambitious Touch Book detachable netbook/tablet combo last year, I’d suspect this new product they’re touting is all vaporware.  Since they did, they probably deserve the benefit of the doubt for the Smart Book, which takes the detachable computer concept up a whole other level.

Last year’s machine, in case you don’t remember, was a netbook, whose touchscreen LCD can be detached completely from the keyboard.  Once separated, the pull-out device turned into a portable 8.9-inch tablet.

The Smart Book takes the same concept and multiplies it several times.  Aside from the removable 8.9-inch capacitive touchscreen (which turns into a tablet), it adds a touchscreen MID that can be used as a VOIP phone (they’re calling it the Mini Book) hidden somewhere in the tablet’s body.  The Bluetooth keyboard, of course, can be paired with a different computer, while also having a slot for hiding a USB dongle and a USB to HDMI for connecting to a second monitor.

Details of the hardware include an  ARM Cortex-A8 processor with video and 3D acceleration (no speed given), 512MB of RAM, 256MB of built-in storage, WiFi, two webcams, a microSD card slot (with 8GB preloaded) and three batteries (one for the keyboard, one for the tablet and one for the Mini Book).    According to Always Innovating, the setup can run Android, Chrome, Ubuntu and their own AIOS, with a hardware switch that will quickly let you alternate among them on the fly.  Talk about ambitious.

We’re not sure when this thing will drop (no word from the company), but they are taking pre-orders.  Price is $549 for the whole system.