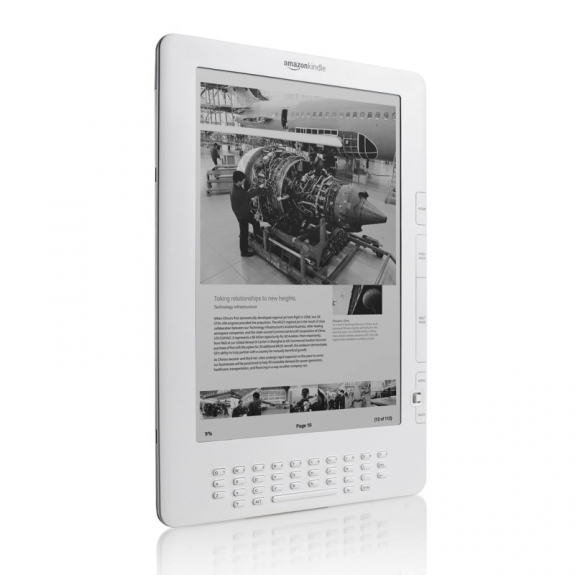 An update in the gadget world typically points to something smaller.  Not so for Amazon’s highly-touted ebook reader, whose latest incarnation is a large format device called the Kindle DX.

While the smaller Kindle and Kindle 2 would be the perfect electronic reader for those who enjoy books, they are hardly the most ideal for another subset of consumers.  After all, there are more reading materials out there than pocket-sized volumes, many of which would never port well to such a small e-ink screen.

As such, Amazon equipped its latest e-reader with a full 9.7-inches of display, over twice the size of the panel on the Kindle 2.  The upsized screen now sports a 1200 x 824 resolution (150 dpi), to go along with a 16-level grayscale suite.  Apart from that, the DX is getting an accelerometer to allow for an auto-rotating viewing orientation along with being equipped with native PDF support. It retains most of the same controls as the Kindle 2 (QWERTY keyboard and joystick), while coming in at expectedly bigger 10.4″ x 7.2″ x 0.38″ dimensions.

Aimed squarely at students when it first rolls out, the Amazon Kindle DX is hoping to make a dent as a tech-savvy replacement for physical textbooks students tend to carry around in school.  With the device, students can free themselves from the hassle of large and thick volumes of classroom material, having all the textbooks they need in a single 1.3lb machine.  Additionally, Amazon is angling for the DX to be the new electronic platform for newspapers and magazines, many of which should appreciate the generous screen real estate, allowing them more flexibility in their layout and presentations.

Those who need more than the Kindle 2’s pocketbook aesthetics in an e-reader should find the Kindle DX a welcome change.  In fact, with the addition of screen rotation and PDF compatibility (along with enough storage for 3,500 titles), it’s a considerably better machine than any of its previous iterations.  Official release is slated for June 10th at a retail price of $489.