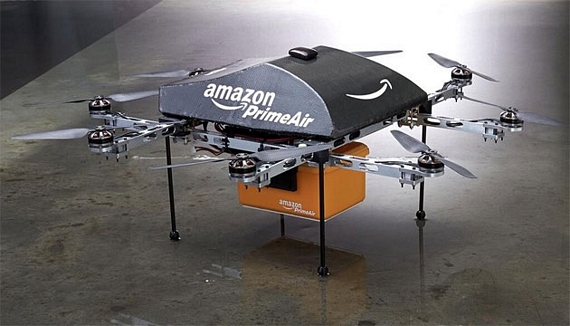 With the advent of affordable drones, plenty of things that were previously difficult and expensive have now become accessible and affordable.  Overhead photography and video work, for instance.  Same with delivering a payload of explosives into enemy camp (by explosives, we mean turd bombs; and by enemy camp, we mean the annoying neighbors).  We guess those same drones will make for a great courier delivery service, too, and that’s exactly what Amazon is planning with their Prime Air program.

Amazon’s existing program is already impressive with its next-day delivery service, fulfilling customer orders within a short 24 hour window.  Looking to stay far ahead of the pack, though, is never a bad thing and the company is now looking to shave that further down by using drones to perform the deliveries in as little as 30 minutes.

Rather than use existing drones in the consumer marketplace, Prime Air will utilize octocopter drones developed and tested inside the company’s own R&D labs.  According to a feature shown on CBS’ 60 Minutes this Sunday, the drones will pick up packages in small buckets at the company’s local fulfillment centers (only products five pounds or less qualify), then fly directly to nearby customers’ homes to deliver them.  This all happens in real time as orders are put in, making for an incredibly efficient service destined to satisfy latent needs for instant gratification.  That means, you can order your LEGO Builders Guide at 12:00 PM and you might actually get it well before you start lunch at 1.  Sweet.

Sadly, this won’t be launching anytime soon.  In fact, they estimate it isn’t likely to happen until four to five years from now, given the potential safety and regulatory issues it’s likely to face.  Still, it’s an exciting proposition — one that gives us a glimpse into the possible future of delivery services.