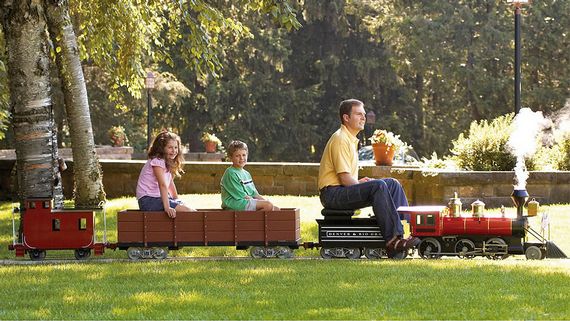 The miniature trains you continue to play with well into your adult age bring you plenty of joy.  But we all know tabletop miniature trains can only go so far to satisfy you.  If you want true lasting happiness, you must have a miniature train you can ride around the backyard.  Well, you can finally find genuine bliss in this world with the Amusement Park Ride-On Train.

That’s right, it’s a miniature train you can ride.  Sure, the 1:8-scale train set is nowhere near as massive as the real Baldwin Mogul from which it is based on, but you can get on it and choo-choo your way around the railroad you lay down in the  backyard until the end of time.  So, yeah, it’s awesome.  Wee.

The Amusement Park Ride-On Train consists of a locomotive powered by four 250-watt 24-volt electric motors, along with three freight cars that you can connect to it.  A total of four seats are installed on the cars (one on the tender for the driver, two on the gondola, and one on the caboose) for your ride-along because even magnificent train rides can get boring without company.  Even better, the locomotive can pull up to 1,600 pounds, so you can bring cargo along for absolutely geeky roleplaying.  Speed can be controlled from the tender seat.

Don’t know how to lay down real railroad tracks?  Not a problem, as the set comes with 228 feet of 7.5-inch gauge track, which you can set up as a huge 60 x 80 foot oval for backyard rail transit purposes.    Features include an integrated 50-watt sound  system with realistic train sounds, four 12-volt DVC batteries (rated at up to six hours of operation), and regenerative braking (to maximize battery power).

You can buy the Amusement Park Ride-On Train from Hammacher Schlemmer, priced at $23,000.  Now, if only someone can create a ride-on backyard version of this minature rollercoaster, life will be complete.