Truckbot Is An Intelligent Robot With A Smartphone Brain 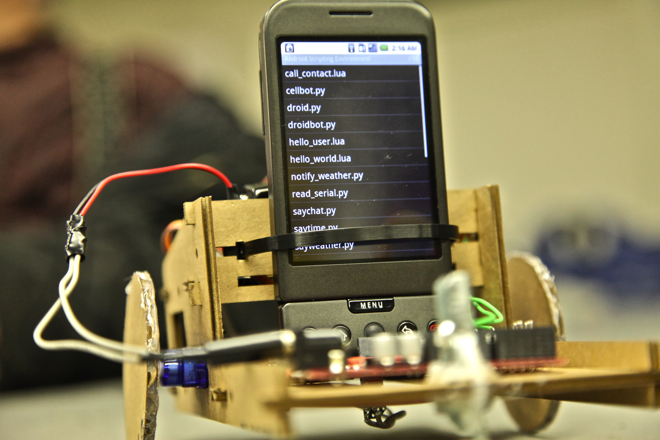 Got an old smartphone?  Don’t trade it in and don’t sell it for cheap to anyone who vaguely resembles a mad scientist.  If you do, you may be aiding in humanity’s demise against the robot invasion.  Proof: the currently dumb, but potentially powerful Truckbot, a robot with a smartphone grey matter.

The brainchild of Tim Heath and Ryan Hickman, the first-generation droid may look like a sloppy patch-up job now.  In fact, it looks nothing more than a miniature handcart with a board, some wires and an Android powered HTC G1 strapped to it.  All it does is roll around a table too, turning and heading off into specified directions.  Now you’re probably asking: “That’s the robot invasion?  Even I can pull that off if I ever stopped playing Farmville long enough.”  Well, you’re probably right. 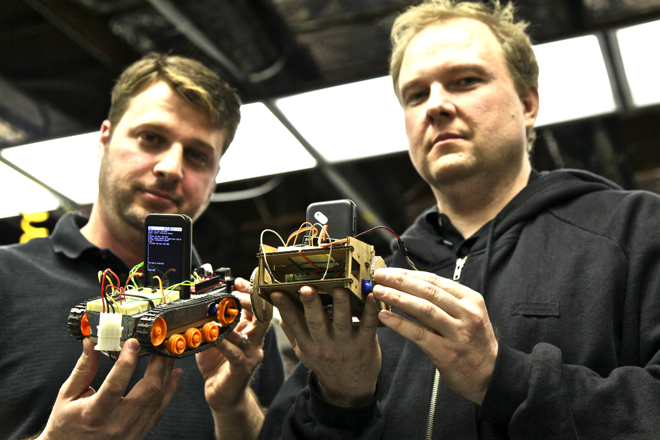 Truckbot’s setup actually sounds simple enough that any budding evil genius can get one up and running within a short while.  Parts consist of a basic Arduino board, a micro servo, a hex inverter, a USB breakout board, a mini-breadboard and a bunch of laser-cut (if you can believe they laser-cut that ugly thing) cardboards.  Oh, and of course, the HTC G1, which runs Cyanogen and a custom Cellbot code, which the duo is making available for every ill-intentioned misanthrope to use.  Basically, you laser cut the cardboard (using a PDF they supply), attach various electronic components (breadboard, rear caster, 9V battery, servos, and Arduino), glue the servo arms to the wheels, connect the wiring and mount the phone.

Yep, that’s the ancestor of the future robot overlord.  With a fully-programmable smartphone running Android at the helm, any talented programmer, engineer or mad scientist can easily program the simple robot to do whole lot.  For instance, you can rig it so that the Arduino informs the G1 when an obstacle is in the way, which the smartphone can then decide to eliminate by activating mounted rocket explosives for absolute destruction.  And if you’ve seen the complex programs they do with mobile phones now, you know it’s capable of making even more sophisticated decisions than that (like going around the obstacle to inspire a sense of security before obliterating it with missiles, for instance).

We’ve seen the future and it’s robots…powered by smartphones…taking over the world.  And that’s the Truckbot, the bastard that started it all.