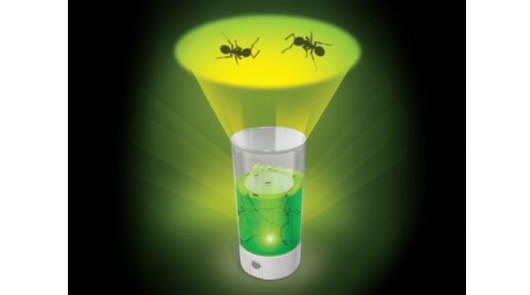 Turns out kids still play with ant farms. And to make it more fun, some companies started using green goopy gels for the harvester ants to dig into instead of dirt and sand. And just in case the kids get bored with that, the Ant Farm Revolution adds another twist — it can project shadows of the ants on your terrarium up on a ceiling.

Made by Uncle Milton, the ant habitat uses the same semi-transparent green goop called a tunneling gel that’s become popular in recent times. Designed specifically for ant farms, the gel is packed with its own nutrients (made from seaweed extracts, water, amino acids and sugar), providing the crawlies with a continuous source of food and moisture (yep, no need to feed them).

The Ant Farm Revolution uses a cylinder-shaped container with see-thru side panels to give you an unobstructed 360-degree view of your social insects. It has a projecting lens on top and a built-in LED lamp that work together to beam giant shadows of the ants creeping over your ceiling. If you live with anyone that’s scared of ants, we can’t imagine a better prop to turn on while watching a scary movie (in 2D, of course) with the lights out.

Three AAA batteries are required to keep the lamp powered. We don’t recommend keeping them on the whole time, though — not only will it be a waste of energy, we imagine the constant strong light isn’t so fun for the ants, either. Then again, they’re locked up in a container, swimming in goop, so more inconvenience probably won’t be a big deal.