Anybots’ QA Telepresence Robots Will Substitute For You In The Office, At Meetings, Maybe With Your Spouse Too 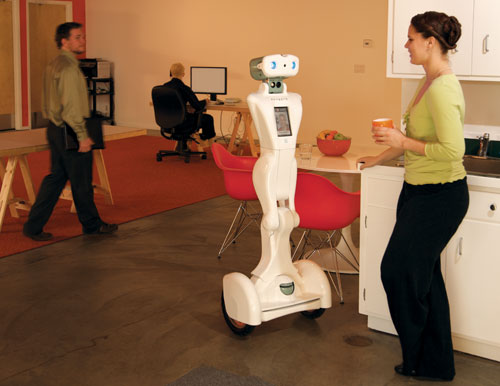 Screw telecommuting, the future is all about robotic doubles in the office.  At least, that’s what Anybots’ QA telepresence robots seem to suggest, faithfully subbing in for your bedridden and homebound co-workers.

How exactly does it work?  Instead of having to come to work feeling dizzy and with bloodshot eyes after a hard night of partying, you can have your humanoid buddy fill in for your presence.  You operate it from home, directly from your laptop, maneuvering it into your subordinates’ cubicles to catch them playing Farmville in the middle of the workday or attending your meetings with the corporate bigshots. 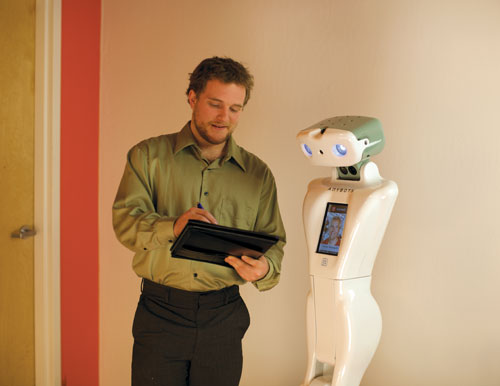 Each QA telepresence robot comes with a 7-inch LCD screen, displaying a digital face that smiles at everyone it encounters.  It’s equipped with dual 5-megapixel cameras (in the eyes) that stream feeds directly to your computer, so you’ve got spy-vision at work in real-time.  You can deck it with numerous variations, including ones that stream hi-fidelity audio both ways (so you can force your co-workers to talk with your robotic substitute) and ones that come with a laser pointer (so you can hold meetings and blind people with your robot body double).

Anybots plans to bring versions of their telepresence robots to the market as early as the second half of 2010.  While I’m not sure how much the demand is currently, it really sounds nothing more than a glorified webcam on wheels.  Granted, the mobility is pretty impressive, rolling on two 12-inch rubber wheels using LIDAR navigation at up to 6mph.

The QA telepresence robots, which should take telecommuting to a whole new level, are being pegged to retail between $10,000 to $15,000 apiece.  As an aside, make sure to keep it away from your romantic partner(s) at the office.  The last thing we want is to commence human-robot breeding (dude, your robot can go all night long).  We’ve seen enough sci-fi fare to know how things like that end – like 2012 or something.