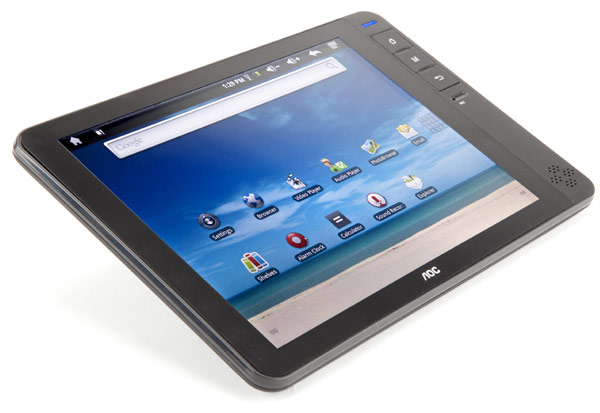 Cheap tablets — you know they’re coming.  And they won’t just have obscure Chinese brand names either.  Case in point: this just-announced AOC Breeze, a sub-$200 Android tablet from the LCD/LED monitor manufacturing giant.

Granted, an expertise in PC displays doesn’t exactly mean that the company will be able to produce tablets with any decency.  Given that this is essentially going head to head with crapgadgets from manufacturers you probably don’t want to touch with a ten foot pole, it is a significant development.

The AOC Breeze is an Android 2.1 tablet with an 8-inch capacitive touchscreen, sporting an 800 x 600 resolution. A row of physical keys along the right edge, a LED indicator and the  built-in speaker’s window join the display in front.  Details include a built-in accelerometer (for auto-rotate), WiFi, 4GB of onboard storage, a USB port, a 3.5mm headphone jack and a microSD card slot.

A Rockchip processor runs the action, although AOC held off on giving any details about it.  Best guess is it will fall under 600Mhz, which isn’t too bad when all you’re after is a cheap mobile device.  Battery is rated at 6 hours of video playback and up to 12 hours for audio.

As always, the jury’s up on whether this will be the cheap tablet of your dreams.  There’s room for hope, though.  AOC is an established brand and the Breeze doesn’t look all that bad from the product pictures.  We should know more when they show it off at CES 2011 later this week, as well as when it hits store shelves at the end of the month.