“Gangster” may not have officially been “gangsta” till the 90s, but the 19th-century Apache Pocket Pistol sure looks like it came out of that culture.  Over a century since it first adorned violent people’s hands, the pocket able weapon still manages to awe.

How does it work?  Well, first, you can fold it and keep it in a small pocket.  When you get into a fisticuff, simply pull it out, put it through your knuckles and smash metal into your opponents’ faces.  If you want to do more damage, swivel the bayonet to turn it into a knife and stab them silly (you’re going to have a hard time playing butcher with a 1.5-inch blade, though).  In a worst case scenario, you can unfold it fully and start firing.  Aim is reportedly pretty bad.

Folded up, it measures less than two inches in length, which makes it a ridiculously minuscule weapon.  In fact, it isn’t likely that the same dimensions will be of much use today, because the finger holes, for one, are supposedly too small to fit most hands (especially big, scary bangers).

Production runs for the ultra-cool three-in-one is estimated to have taken place between 1870 to 1900.  The exact number of existing units isn’t known, although they’re considered quite valuable among collectors due to their unique form.  While many agree that the Apache Pocket Pistol is definitely one of the coolest-looking handguns then and now, it’s also a largely underpowered gun.  In fact, any gangbanger toting this today who gets into trouble will probably end up drawing the short end of most exchanges, whether they use hands, blades or bullets.  At least, you can die in style. 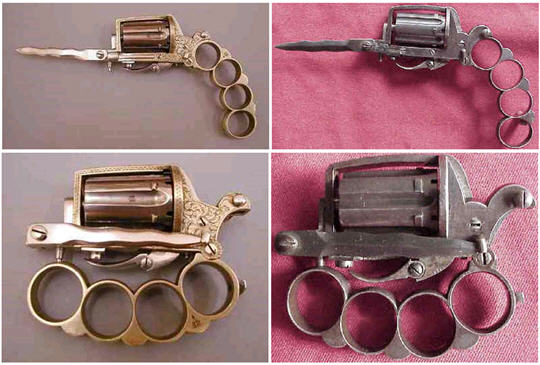 [Hell In A Hand Basket ]