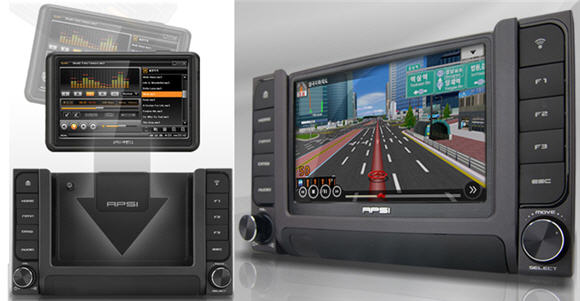 Personal Navigation Devices, as of late, have largely been no different from each other.   Take a slab of brick, add a touchscreen, put in a bunch of electronics inside and load it with all the software it needs.  That’s why the APSI C100, which integrates the aforementioned slab into a dock with a bevy of features, is making quite the impression.

Intended for release in the Korean market, with no seeming plans to let the rest of the world in for now, none of the advertising material comes in an English version, so the actual mechanics of how it works isn’t clear.  From what we can glean, though, it comes with two components – a snazzy-looking touchscreen handheld and a GPS cradle.

The dock is intended to be permanently installed into your car, adding physical controls, A/V hookups, a DMB TV antenna port, a slot for an optional external GPS receiver and a recharging facility for the handheld unit.  All you have to do is slip that touch-enabled beauty in to use all those features packed in the windshield mount, along with the unit’s high-end GPS features (which, based on the photos, include full 3D mapping of both roads and landmarks).  Once you’ve reached your destination, simply pull out the central panel again, throwing it in your pocket for use as your slim and light personal media player.  How cool is that?

We can’t scrounge up all the details of the device, but, suffice to say, this thing takes PNDs to a space we’ve never seen before.  Let’s hope it flies out of Korea and finds its way to the rest of the world.

[PMP Inside via Slash Gear]