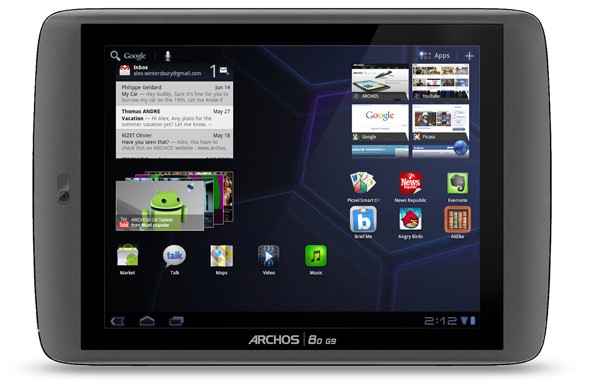 Both machines are nearly the same, save for the screen size.   The former has an 8-inch display with 1024 x 768 resolution, while the latter gets a 10.1-incher at 1280 x 800 pixels.  Both run Android 3.1 Honeycomb, with full Market access (unlike Archos’ previous efforts) and Flash support in the browser.

The Archos G9 tablets boast a dual-core OMAP 4 processor (1.5GHz ARM Cortex A9) at the helm, which they claim reduces browser page load time by up to 50% compared to Nvidia Tegra 2 systems.  Instead of flash storage or SSD, though, they’re using Seagate’s 7mm-thin hard drives, allowing the devices to pack an impressive 250GB of storage.  There’s no word on how this affects battery life, however, so consider that something to look out for.

Other details include WiFi, an HDMI out (with full 1080p playback) and a full-sized USB port hidden in the back.  For 3G access, Archos offers a plug-in stick that’s sized to fit the rear slot as an extra option (just add your SIM card).  No word on the rest, but we assume it has, at least, a front-facing camera (you can see it in the photo) and Bluetooth.

The best part, though, are the prices.  The Archos 80 G9 is expected to retail at $279 and the Archos 101 G9 at $349.   At these specs, the MSRP does sound like a dream, so expect some trade off.  Let’s hope battery life isn’t the unfortunate recipient.