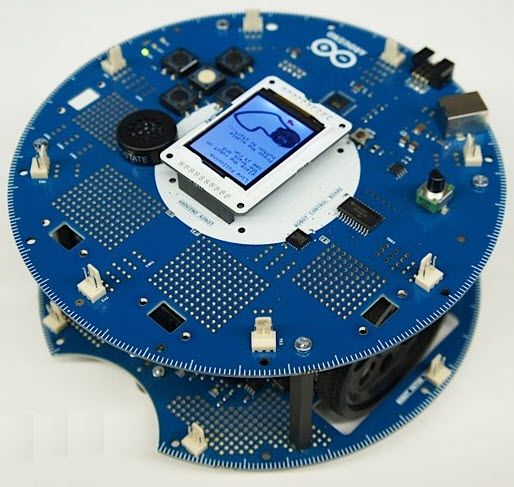 To say that Arduino’s micro controllers revolutionized prototyping and rapid hardware development for home tinkerers will be an understatement.  And it just keeps getting better.  Now looking to extend beyond single micro controller boards, the company has announced their latest product: the Arduino Robot.

Made in collaboration with Complubot, it’s a Roomba-shaped robotic platform that further extends the kinds of projects you can build from the comfort of your mom’s basement.  That’s right, robots!  If you’ve ever tried to leverage an Arduino into a robot army but got stuck somewhere down the line, this should make the process just a tiny bit less difficult.

The Arduino Robot consists of two circular boards equipped with Atmel’s ATMega32u4 layered on top of each other, with a pair of motors and wheels sandwiched between them.  The bottom board holds the motors, wheels, batteries, a power connector, some infrared sensors and a switch, while the top board houses a color LCD, a microSD card slot, a speaker, an EEPROM, a compass, a knob and a bunch of LEDs.  Basically, the bottom board controls the robot mechanics, while the top unit handles the display and I/O.  The whole thing measures 10 x 19 cm (h x d).

Since it’s a well-equipped robot all on its own (with bundled software to boot), it can be used on its own for hours upon hours of experimentation and play.  As with Arduino’s other products, of course, half the fun is in altering it via pre-soldered connectors and prototyping areas on the board, along with open source code that you can modify as needed.

Introduced at this year’s Maker Faire, the Arduino Robot will be available online starting in July.  Price is $275.