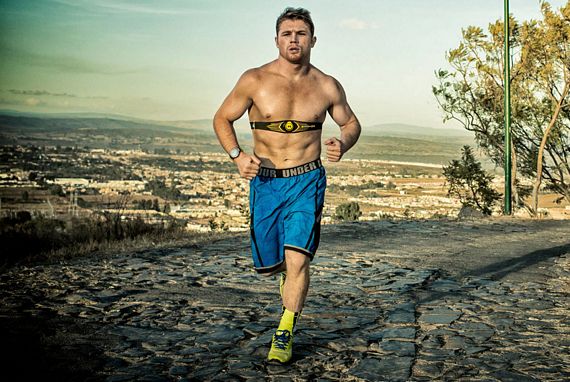 Fitness trackers come in all shapes and sizes now.  From wristbands to watches to coins, there’s, literally, a huge array of form factors to choose from.  The Armour39 has to be the biggest of the bunch, strapping all the way around your chest instead of merely looping around your wrist.

Under Armour has always made huge deal of performance-enhancing tech in their sportswear — moisture wicking, heat trapping, anti-odor, and more.  With the burgeoning niche of performance monitoring gadgets, it’s only appropriate to see them bring their focus on tech to the growing category.

The Armour39 consists of three components: a chest strap with the tracking module, an iPhone app and an optional watch for those that prefer to leave their smartphones at home (because that actually minimizes the chance of damaging it).  A dedicated CPU, an accelerometer, onboard storage and a Bluetooth 4.0 chip sit inside the tracking module, while a pair of metal probes along the edge connect to a heart rate sensor on the strap.  Once strapped in, the device will measure your speed, heart rate, calories burned and step count, similar to other fitness trackers.  Taking it up a notch on the measurements, though, it includes a pair of new metrics: intensity (which is calculated from numerous variables, such as maximum heart rate and speed) and willpower (a holistic score that takes all measurements taken into account — basically, how hard you pushed in a particular run).

As with other companion apps (iPhone only for now, Android slated for later), the Armour39’s will let you see your metrics in a glance.   Same goes for the watch, whose sole job is to display your stats in real time.

Slated to hit shelves March 20th, the Armour39 strap is will retail for $150, with the watch costing another $200.