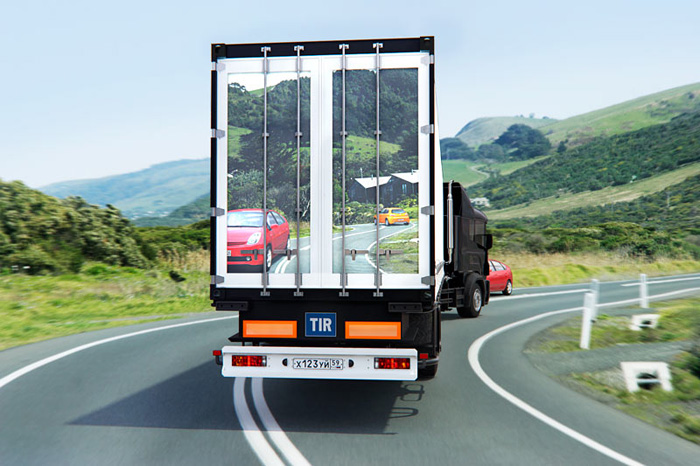 I hate driving behind a truck.  For one, those large containers they’ve got hoisted in the back scares the crap out of me (I sometimes dream they’re falling on my windshield – ouch).  Worse, they make passing difficult since you can’t see what’s coming.  Unless the truck in front of you is using the Transparentius, that is.

Created by Art Lebedev, the clever concept solves the problem of the “blind zone” by projecting the image of the road ahead onto the back of the truck.  That way, you can see if another car is actually coming or if the road’s wide open for you to overtake.

Like many great ideas, the mechanism is unusually simple.  You simply put a motion camera in front of the truck and send that image to a large projection display around the back.  The simplicity is dumbfounding, isn’t it?

Of course, I don’t know a single trucking company who would willingly shell out the cash to outfit all their lorries with this kind of setup.  Paying for a display that’s large enough so that the motorist can see it should prove quite pricey, after all.  Even worse, they’re doing it for other people’s benefit – there’s no profit in that whatsoever.

Who knows, though?  Stranger things have happened.