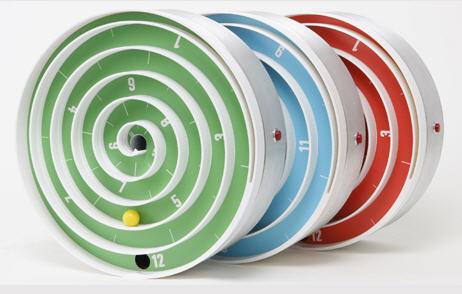 Want a clock that can hypnotize you?  We’re not sure how well the Aspiral Clock can put you in a trance, but its swirly face looks like it can leave you dizzy if you stare intently while it’s moving fast.

Yes, it’s supposed to be a clock.  Don’t worry, it won’t require Tokyoflash-level nerdery to read the time.  In fact, the mechanism is rather straightforward – the ball pops out at 12, then moves its way through the succeeding hours and minutes.

The Aspiral Clock is a self-spinning timepiece, whose movement drives the ball along the spiral ledge until it reaches the center.   You tell the time by looking at the position of the ball.  If it’s at the center point between 2 and 3, for instance, then it’s 2:30.  Once it reaches the center, it drops into a hole and comes out of the same opening where it originally started.    Very cool. Created by Will Aspinall and Neil Lambeth, the clock is built out of London and comes in various designs for the face (some with detailed time markings, others with less).  You can also request a custom backing, if you want it personalized.

Definitely a good choice when you’re looking for something different than another boring wall clock.  The Aspiral Clock is available for £350.

[Aspiral Clocks via It’s Nice That]