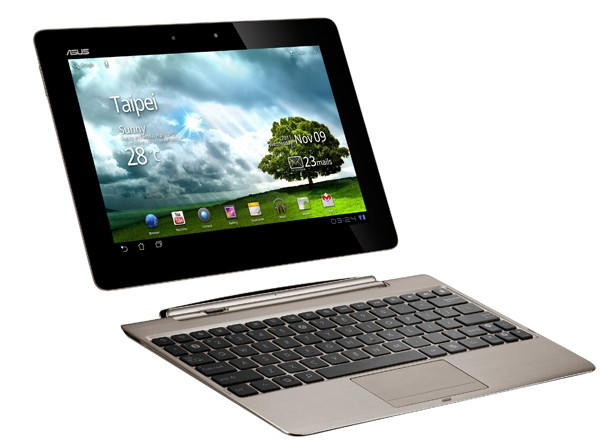 Powered by the new Nvidia Tegra 3 system on a chip and a 12-core GeForce GPU, the slate brings some serious power to the table.  According to Nvidia, this kind of hardware should allow the tablet to perform with the same kind of power normally reserved for PCs.  From the specs alone, we think this could rival high-end game consoles in graphics and processing.

Just like its predecessor, the Asus Eee Pad Transformer Prime comes with a keyboard dock that lets you use the tablet like a laptop when needed.  As an upgrade, it’s a worthy step up on all departments.  Instead of a big black boring slab with a plastic back, for instance, the new device comes decked in a 0.33-inch aluminum shell with fingerprint-resistant hydro-oleophobic coating.

Specs include a 10.1-inch Super IPS+ display (1280 x 800 resolution and 178-degree viewing angle), 1GB of RAM, an 8.0 megapixel camera module, a 1.2 megapixel front-facing camera, aGPS, SonicMaster audio, a choice of storage (32GB/64GB) and a gaggle of ports (micro-HDMI, microSD card slot, 3.5mm audio jack, USB).  Battery life is pegged at an impressive 12 hours, with the dock throwing in an additional 6 hours from its onboard module.  It runs Honeycomb, but will get Ice Cream Sandwich as early as December.