ASUS Transformer Book V Is Two Laptops, Two Tablets, And One Phone In A Single Device 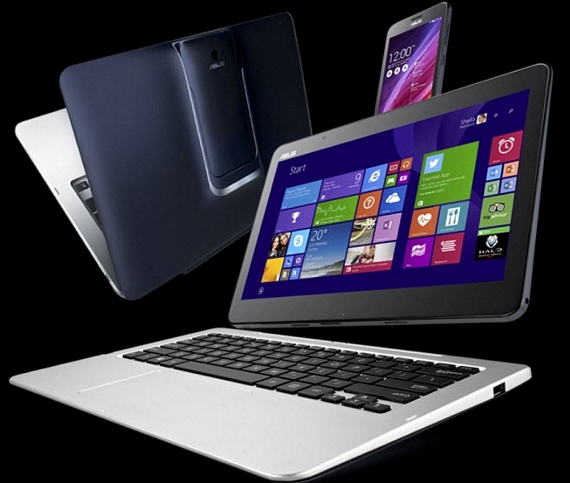 Nobody’s ever going to accuse the ASUS Transformer Book V of not trying to be too many things at once. That’s a fact. Not only is this a full-fledged Windows laptop, it can also function as an Android tablet, a Windows tablet, an Android smartphone, and an Android laptop.

In laptop mode, the newest ASUS Transformer comes with a full-size QWERTY keyboard and touchpad that can run both Windows 8.1 and Android 4.4 KitKat concurrently. Just press the dedicated hardware button to switch from one OS to the other, making it possible to use your favorite apps on both platforms from just one terminal. 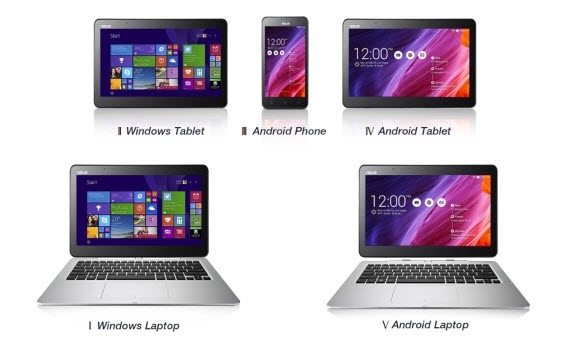 To use as a tablet, simply detach the 12.5-inch HD IPS display from the keyboard and touchpad assembly. Like in laptop mode, you can switch between Windows and Android. Rather than a dedicated hardware button, though, you simply tap on a designated control on the UI. Need a phone? Tug on the bulge at the back of the tablet to pull out a 5-inch smartphone running Android, which you can slot into a pants pocket like any phone before leaving the house.

Windows is powered by an Intel Core processor installed on the tablet, with Intel HD graphics and up to 1TB of storage (128GB SSD on the tablet, plus HDD on the keyboard case). Android, on the other hand, is run on the smartphone’s quad-core Intel Atom CPU. Since the OSes are running on separate hardware, it’s easy to launch them concurrently without affecting the performance on either system.

No pricing or availability details have been announced for ASUS Transformer Book V.