Your notebook speakers don’t deliver enough panache? You might want to score Asus’ new uBoom Series Notebook Speakers, sound-bar style audio devices with an unusual form factor that looks like a cross between a tasty sausage and a muffler.

Both devices connect to your laptops via USB, foster driver-free operation and have an auxiliary audio input for non-computer use. Asus claims they’re intended to provide a single-bodied, powerful 2.1-channel system while you’re on the move. Let’s be honest, though, these things don’t exactly make their own space in your laptop bag that easily. 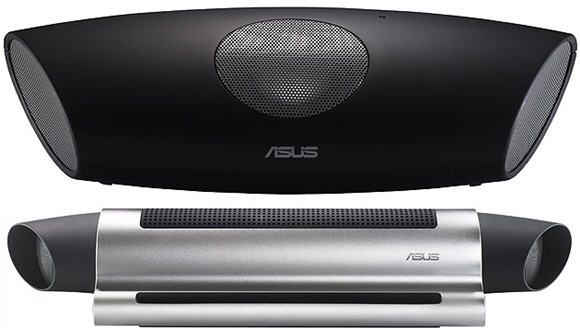 Touted as the most compact sound-bar style speakers around, the series consists of two products that Asus claims are at least 50% smaller than the average single-panel sound system. The larger one, the uBoom, is a 3kg beast with 24 watts of sound, a microphone jack, an independent power supply, 2-inch left and right speakers, and a 2.5-inch subwoofer. The relatively slimmer uBoom Q rocks 2.4 watts, weighs a lighter 400 grams, and sports 2-inch speakers and a 2.25-inch subwoofer.

Some folks will undoubtedly find the tube-like design appalling, especially considering that sound bar speakers don’t usually look like chubby car mufflers. I like the attention-grabbing design, though – they sure won’t fade into the background.

The uBoom Series Notebook Speakers are now up on Asus’ site, but no price or release date has been announced yet.