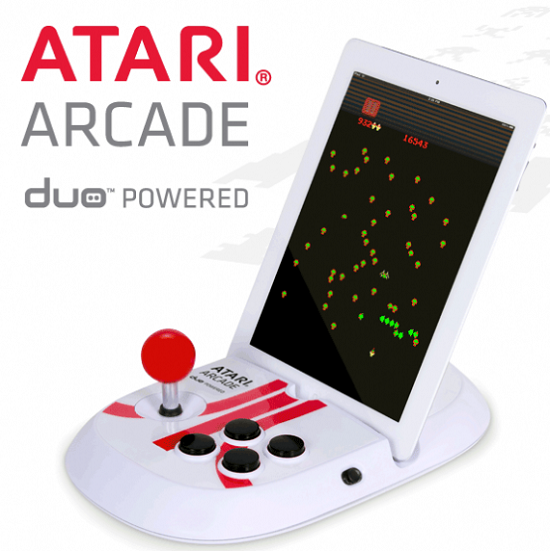 The iCade is great.  At $99.99, though, it’s a little too steep for a toy to occasionally use with your iPad.  We guess Atari saw the potential for a coup and came up with their own: the Atari Arcade-Duo Powered Joystick.

Granted, it’s not as pretty as the iCade, which sets your tablet up with a  full arcade box.  Instead, this one is more like a dock with a joystick and buttons.  Less novelty, but the functionality should be the same.

The Atari Arcade-Duo Powered Joystick comes with a bulbous joystick and four buttons, which makes it less generous than the iCade’s eight.  Considering this will be used to play Asteroids, Centipede and  Missile Command, the 4-set should really be all the controls you need.   And it doesn’t use Bluetooth to connect to the iPad either — instead, you dock it to the 30-pin connector (which means all games are in portrait mode).  While that rules out playing with the iPad sitting somewhere else, it does save you from the hassle of having to charge another accessory.

If you can’t really justify the iCade’s price tag, the Atari Arcade-Duo Powered Joystick looks every bit as capable for retro gaming at a cheaper $59.99 price.  It’s currently listed as “available soon” on Discovery Bay Games’ site (they’re Atari’s partner for this product).  Word is, it hits stores starting October.