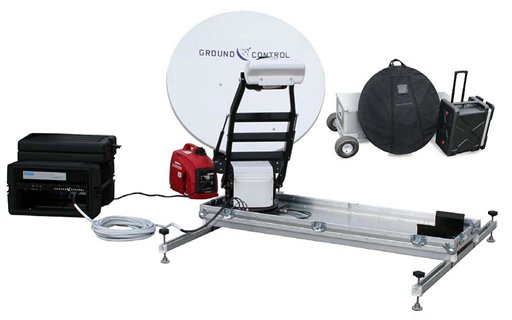 Sure, it’s nowhere near as compact as the Knighthawk 3G, but the AT&T ARMZ (AT&T Remote Mobility Zone) offers a bit more oomph in terms of features.  Plus, it has the bonus of looking like a real cellphone mini-tower, instead of an oversized router (which makes everything feel more official).

Designed to facilitate emergency communications, it lets you quickly set up a functioning cell site in case all voice and data coverage are unavailable in an area.   By quickly, of course, we mean after some work, since you’ll have to take the individual components out of the suitcase and assemble them to get running.

Portability, in the case of the AT&T ARMZ, is a relative concept.  The set weighs a tad over 100 lbs. and requires power from a generator.  Still, it keeps you ready to set up a communications center at the drop of a hat, making it a heck of a convenience for  first responders and emergency personnel.

The kit includes a dish for satellite uplink, a pair of radios, and an antenna.  Uplink can be established in under 30 minutes, with the radios supporting up to 28 callers within a half-mile radius.