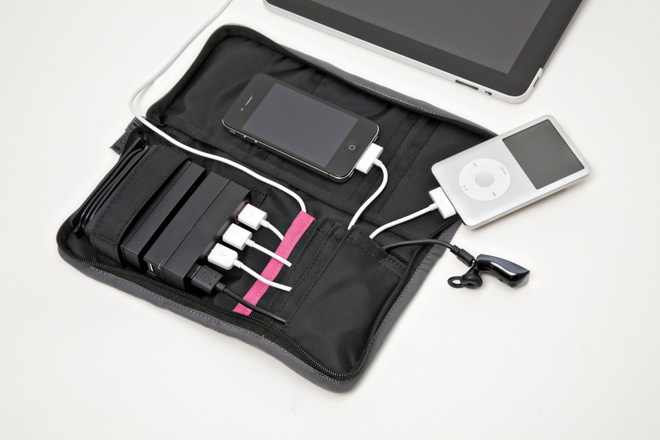 We’ve seen plenty of creative solutions for charging hubs before.  The Aviiq Portable Charging Station goes about it as straightforward as possible and succeeds in the resulting simplicity.

Designed to make on-the-go charging a less complex proposition, it’s a simple USB hub inside a zip-up nylon bag.   Instead of remembering to pack a bunch of chargers into your luggage when you leave home, just take this along and you’ll be replenishing your gadgets while holed up in your sleazy motel room like it’s nobody’s business.

When closed, the Aviiq Portable Charging Station resembles those CD booklets you used to stored your discs in (at least, back when you still relied heavily on optical media).  The bag’s form factor also helps portability, as you can easily carry this in one hand, as well as slip it into a slim corner of your bag for packing.

When opened, the layout is quite handy as well.  You get the main hub (four USB ports) strapped in place on the left hand side with four pockets under it.  Why pockets?  So you can slip in the cables inside the pockets, making sure they’re adequately separated to avoid your usual tangled mess.  One of the pockets is color-coded with pink, indicating the hub it’s connected to can be used to sync with a computer (instead of merely charging).

The Aviiq Portable Charging Station puts out 15 watts of power, allowing it to charge four gadgets at a time and be used with an iPad (which requires 10 watts).   It’s available now, priced at $79.99.