I’m not exactly sure what use I can find for these B-Squares.   Just looking at the pictures and the product description on Kickstarter, though, I already want a dozen of them.

In a nutshell, the modular electronics system is a way to build stuff using tiles with different electronics embedded in them.  One square can do one function, which you can then pair with another square that does a different function, creating a tiled set that could, theoretically, end up doing a whole new thing entirely. 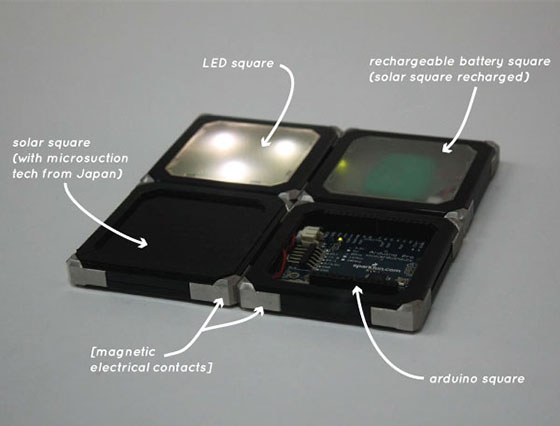 Each B-Square comes with magnetic contacts along all four corners, allowing you to attach them side by side or in perpendicular fashion.  Aside from sticking together, the contacts also facilitate transmission of electric signals between each tile so they can communicate and transfer power among themselves.

As a start, they’re building six different types of tiles: Solar Square (holds a 0.25w solar panel and a microsuction cup material for sticking onto surfaces like windows), Battery Square (holds three rechargeable AAA batteries inside), LED Square (fitted with 3 multi-color LEDs), Arduino Square (yep, it’s got a 3.3V Arduino Pro microprocessor inside), iPhone Square (integrates a standard iPod connector, a PC USB connector and audio outs) and Proto Square (a design-your-own-B-Square with an open PCB you can tinker with).  The idea is  you can simply connect the tiles to each other to build something useful like a solar-powered garden light and iPod dock.  Or, if you’re up to it, you can add a little programming or electronics tinkering  to build something awesome (just, please, don’t let it be something that sends tweets again).

As of the moment, the team behind B-Squares have already reached their target Kickstarter funding.  No word yet on planned production dates, but I’m sure a whole lot of people can’t wait.