Bagel-Shaped Loop Pointer Controls Your TV Like A Wiimote 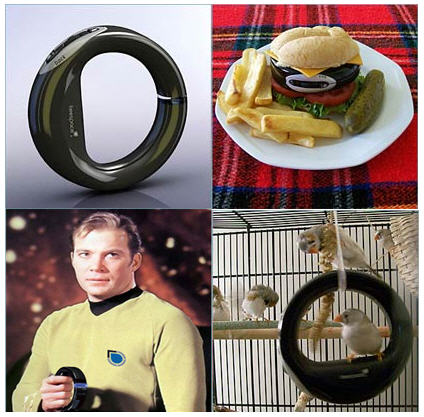 Souped-up remote controls and wireless mouse peripherals be forewarned.  The bagel-shaped Loop pointer is out to take your place in HTPCs the world over and making fun of itself while doing it (check out the official site for a few more funny pictures like above).

First unveiled to a positive media response back in January of 2007, it only took Hillcrest Labs two and a half years (yep, I’m being sarcastic) to bring their “air mouse” device to the market.  Surprisingly, it debuts with nary a competition in the same odd-shape category, although it’s bound to go head-to-head with other 3D mouse devices.

What it does, in a nutshell, is act as a more convenient accessory for controlling the on-screen pointer (along with other mouse-controlled actions) on PC-based home theater systems, allowing you to go through menus and options by merely flicking your wrist while holding it in your hand (it does come with four buttons and a scroll wheel too).   Since it looks like a device out of a low-budget science fiction movie (or one of Cyndi Lauper’s bracelets during the 80s), it gets extra cool points as well.

The Loop works right out of the box and requires no software installation, but you’ll need to plug in a USB dongle to facilitate the wireless communication.  Apart from PCs and Macs, it can also be used on TVs connected to a PS3, Kodak Theatre HD and Apple TV.  Hopefully, it will work with a few other boxes as well, though, it’s going to be hit or miss since the idea was to provide an HTPC control.

If you’ve got your multimedia setup on a PC backbone, I can’t see how you’re going to want to do without this thing.  It’s available now from Amazon for $99.