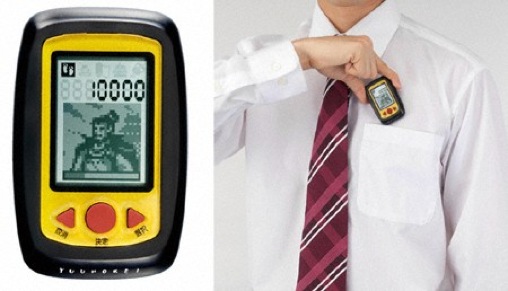 If you can only do one of two things today, which one would you rather engage in, a jog around the park or a handheld video game?   Count me in for the video game crowd – all while downing some chips and a soda at that.  For folks like us, Bandai is hoping they have a solution – a pedometer/calorie counter that integrates a game with your calorie burning.

Who are we kidding?  A pedometer that uses the distances we travel as input for an integrated game won’t exactly make us want to exercise.  Unless the game is good and has a compelling storyline, that is.  Now, does it?

According to the press release (which I don’t understand since it’s in Japanese), the pedometer casts the lazy exerciser as a 16th century Samurai with his eyes intent on taking control of Japan.  You can choose any of three famous daimyo characters from the Warring States Period (Sengoku, circa 1500s).  To succeed in your quest, you will need to take your foot soldiers with you to the battlefield.  Of course, the way to take them there is to clock in the numbers at the pedometer – the more you walk, the closer you will get to assuming your role in history.

It sounds like a cool tool and all, though I doubt it will make erstwhile gamers any less disdainful about the prospects of any exercise that doesn’t involve a WiiMote.  May I suggest a Tamagotchi game in a pedometer instead?  If you don’t exercise, the Tamagotchi will die.  Guilt, so I heard, is a great motivator for exercise.  Have you seen how full gyms are after the year-end festivities?