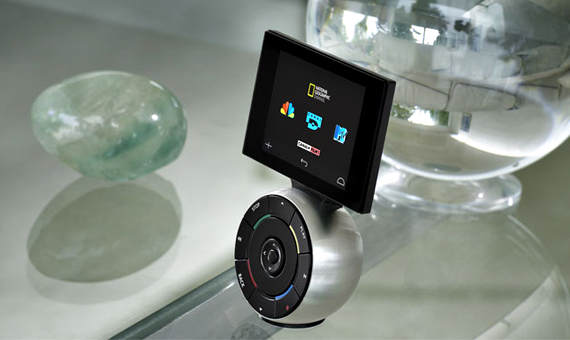 Styled like an egg cut in half with a rectangular LCD affixed on top, the unusual remote has a flat base at the bottom, so you can set it on top of a table with the display and physical controls facing you.   We’re not sure how that aluminum ball will feel cupped in hand, though, so this is something you’ll probably have to try to find out if it’s suited to your tastes.

The bottom half of the Bang & Olufsen Beo6 has dedicated media playback buttons arranged in a circle, including a sound volume clickwheel and four-way navigation.  Upper half consists of the 2.8-inch LCD screen (320 x 240 pixels), along with three soft-touch buttons right under it.  Extra sensors are installed on the shell, which enables it to light up as soon as any part of the device is touched.

For connectivity, you get both IR and WiFi, allowing it to work with a whole host of your home electronics.  You don’t even have to program it to work with your home equipment — Bang & Olufsen will customize it to work with every piece of electronics  you own requiring automation.  If you buy something new, just give them a call and they’ll add it, too.  The idea is that no one wants their remote loaded with unnecessary features, so you only get them installed as needed.

No word yet on the price, but expect the Bang & Olufsen Beo6 to fetch a hefty amount.